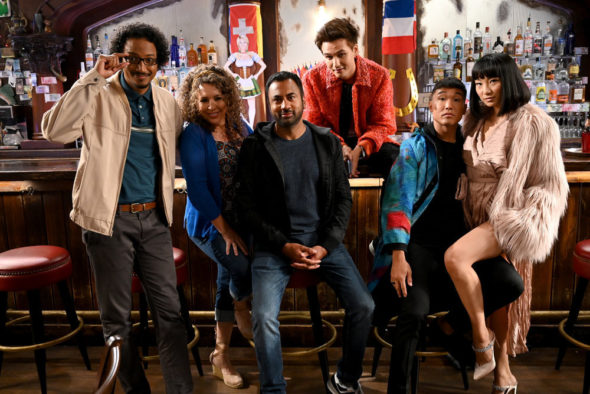 The sun will set on the Sunnyside TV show. The NBC sitcom has been cancelled and is being pulled from the schedule so, there won’t be a second season. However, the remaining episodes will still be made available.

Airing on Thursday nights, Sunnyside stars Kal Penn, Joel Kim Booster, Kiran Deol, Poppy Liu, Diana-Maria Riva, Samba Schutte, and Moses Storm. Garrett Modi (Penn) was the youngest New York City Councilman. However, instead of spending his time in office helping the people that elected him, Garrett lost his way and was seduced by the power and glamour of politics. In the midst of his downward spiral, he’s arrested for public intoxication and stupidity. It’s captured on video and his political career is ended. Having hit bottom, Garrett stays with his sister, Mallory (Deol), and wonders where it all went wrong. Then, he’s hired by a diverse group of idealists — Griselda (Riva), Jim Hao (Booster), Mei Lin (Liu), Hakim (Schutte), and Brady (Storm). They dream of becoming American citizens and believe he can help. This gives Garrett a new sense of purpose and a chance for redemption — as long as he remembers where he came from.
The first season of Sunnyside has averaged a 0.36 rating in the 18-49 demographic and 1.40 million viewers. Three episodes have aired thus far and it’s the lowest-rated series currently on the peacock network’s primetime schedule.

NBC will air the fourth episode this Thursday night and will then pull Sunnyside from the schedule. Production is currently underway on the ninth installment of the sitcom’s 10 episode order. The network has ordered an additional 11th episode. Penn notes that there are plans to try to find the series a new home.

Episodes five through 11 will be released weekly via NBC’s app, NBC.com, and other digital platforms (like Hulu).

Season 11 of Will & Grace will take over Sunnyside’s 9:30 PM timeslot on Thursday, October 24th. NBC has ordered 18 episodes for the comedy’s final season.

What do you think? Do you like the Sunnyside TV show? Are you sorry that it’s been cancelled? Will you watch the remaining episodes?

Really enjoyed Sunnyside! The characters were very funny and the actors did a great job bringing them to life. Would love to see more episodes!

I really liked that series I am very mad that it got pulled and hopefully cbs, abc or fox picks it up

I only attempted to watch for Kal Penn. But the show was HORRIBLE. I’m not surprised it was cancelled.

I really like Sunnyside, thought the twins were so funny, like some of the young people today! Kal is great in his part. Too bad they cancelled this show.

It just seemed like a lot of the comedy was forced. The twins or siblings or whatever were funny on occasion. Everyone else just felt like filler comics. The storylines were a little messy. I really wanted to like it bc I like Kal, but it missed a lot of what I guess was suppose to be good punch lines.

#SaveTheKidsAreAlright#ICanSeeClearyNow#AdoptTheKids the only show on tv that the whole family could watch together and enjoy.very entertaining and funny!

I don’t understand I wanted to binge during Thanksgiving but pulled seemed like a good homage to late Canadian mayor rob Ford R.I.P. man, seems like hulu needs it thank you

I never watched. From the comments I see I missed catastrophe.

What a shame. I have really enjoyed Sunnyside and Kal Penn is one of my faves. The name of the show is not indicative of what it’s about, which maybe didn’t draw in the viewers. If it gets picked up elsewhere, I would follow. Just starting to like the characters- even the rich siblings are starting to show some depth. And replaced by Will & Grace?! I loved the first version, but they are all too old to have the same life situations. I’m over that.

I watched five minutes and changed the channel.

It WAS that bad. I felt bad for Kal so glad they pulled the plug quickly.

I didn’t even get a chance to try it yet but I will just delete it as there is no point anymore.

wow, that was fast

I didnt even watch a full 22 minute episode, so Im not losing any sleep over this decision! Let me just say, I LOVE KAL! He’s gonna get a new home somewhere, he’s so funny! But this show was my least fave of the fall premieres. I just found a few characters weird, not funny.