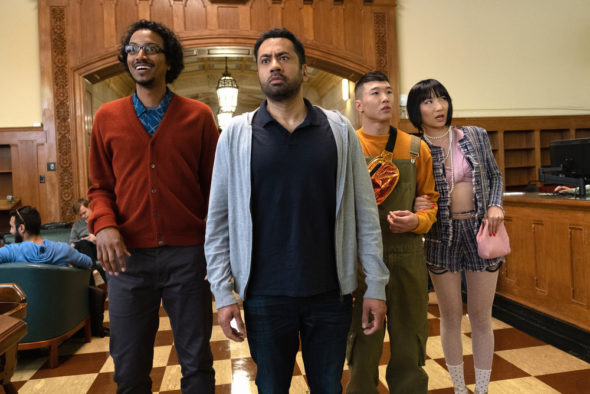 Can this sitcom succeed where others have failed? Has the Sunnyside TV show been cancelled or renewed for a second season on NBC? The television vulture is watching all the latest cancellation and renewal news, so this page is the place to track the status of Sunnyside, season two. Bookmark it, or subscribe for the latest updates. Remember, the television vulture is watching your shows. Are you?

Airing on the NBC television network, Sunnyside stars Kal Penn, Joel Kim Booster, Kiran Deol, Poppy Liu, Diana-Maria Riva, Samba Schutte, and Moses Storm. Garrett Modi (Penn) was the youngest New York City Councilman. However, instead of spending his time in office helping the people that elected him, Garrett lost his way and was seduced by the power and glamour of politics. In the midst of his downward spiral, he’s arrested for public intoxication and stupidity. It’s captured on video and his political career is ended. Having hit bottom, Garrett stays with his sister, Mallory (Deol), and wonders where it all went wrong. Then, he’s hired by a diverse group of idealists — Griselda (Riva), Jim Hao (Booster), Mei Lin (Liu), Hakim (Schutte), and Brady (Storm). They dream of becoming American citizens and believe he can help. This gives Garrett a new sense of purpose and a chance for redemption — as long as he remembers where he came from.

The first season of Sunnyside averaged a 0.35 rating in the 18-49 demographic and 1.35 million viewers. Find out how Sunnyside stacks up against other NBC TV shows.

Will NBC cancel or renew Sunnyside for season two? The show’s been doing very poorly in the ratings so I think that, not only will it be cancelled but, it could be the first cancellation of the season. For now, I’ll keep an eye on the ratings and update this page with breaking developments. Subscribe for free alerts on Sunnyside cancellation or renewal news.

10/15/19 update: NBC is pulling the series off the schedule but is also producing an additional episode.

What do you think? Were you hoping that the Sunnyside TV show would be renewed for a second season? Are you sorry that NBC cancelled this TV series, instead?

The show like a lot of shows around the networks that were released this season are very poor.

another show that wont make it through / past a first season