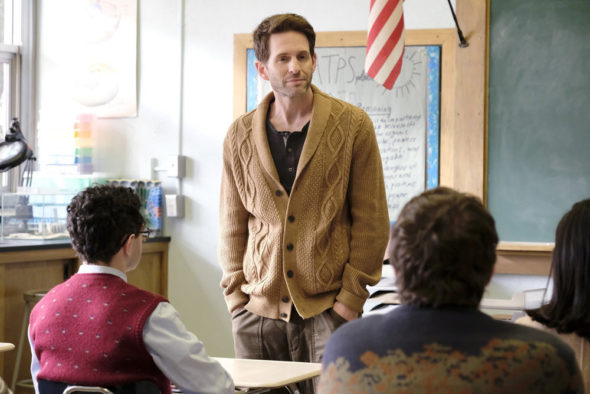 Class is dismissed — for good. NBC has cancelled the AP Bio TV show so there won’t be a third season for the peacock network’s workplace comedy.

The second season of AP Bio is averaging a 0.51 rating in the 18-49 demographic and just 1.96 million viewers. Compared to season one, that’s down by 29% and 26%, respectively. Nine of the season’s 13 episodes have aired thus far.

How does AP Bio stack up against other scripted NBC TV shows of the 2018-19 season? It ranks 17th in the demo (out of 20 scripted shows) and ranks 19th in viewership.

AP Bio’s creator/executive producer revealed that the NBC series had been cancelled via Twitter.

I'm intensely sad to announce that AP Bio will be ending after this season. This has been my favorite project of my life and that's because of the amazing writers, cast and crew. As most canceled shows probably feel, I think we were just hitting our stride and everyone was still

loving the work, so this is very hard. We have 4 left to air and they're 4 of my favorites. Plus 22 others are on Hulu (for now) and https://t.co/wUeZQNY5WZ. Please check them out and tell a friend about the show and tell the people who worked on it that they did a good job!

Co-star Patton Oswalt encouraged fans of the series to do what they can to save the series.

I mean, there’s no better way to spend Memorial Day than binge-ing @NBCAPBio on @hulu. Who KNOWS what might happen if those numbers spiked? Whoooooo knows? #SaveAPBio #BingeBioOnHulu pic.twitter.com/73VQt9FYSx

What do you think? Have you enjoyed the AP Bio TV show on NBC? Are you sorry that it’s been cancelled? Would you have watched a third season?

I really loved this funny spoof on teachers. As I teacher myself I was worried when the show first aired. (Afraid people would actually think this would happen in a real school.) But after I set that thinking aside I loved watching the hilarious scenarios! NBC needs more comedies and not another reality show. Who gives a flying F how others are live?

Whelp, this blows. Short, yet sweet. I hope to see these brilliant cast members in future film creations.

I was disappointed & surprised to see the low ratings on this site for AP Bio. Maybe people just don’t get it, or maybe a different timeslot could help. I thought it was hilarious.

Hey, NBC, maybe the show could develop a following of you’d actually AIR the episodes.

Another great show gets the ax. Maybe Netflix will save it.

Decent show, but Jack Griffin was really hard to like. I won’t be slitting my wrists over this cancellation.

His anti-social personality was part of the joke. It’s a comedy, not a documentary.

I’m not too surprised.

I watched and enjoyed it but the second season did lack some of the renegade spirit of the first.

Netflix please pick this up! It’s such a great show and netflix could make it so much better. NBC is apparently the new ABC. Stupid!

This show had very little promotion outside of maybe its 1st season and unless you are an avid NBC watcher, you had no idea that APBio even existed. I am sorry for the fans of ApBio but this cancellation shouldn’t surprise anyone.