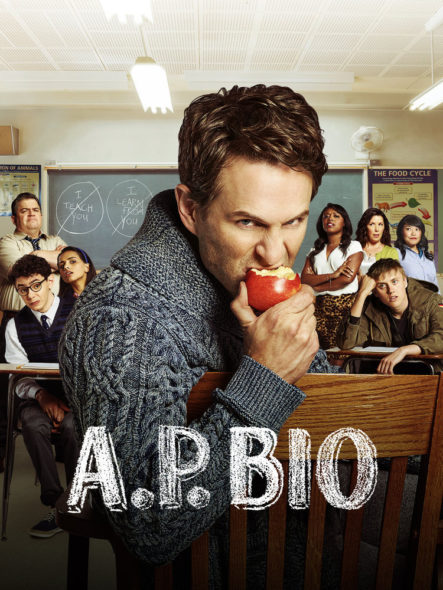 TV show description:
From creator Mike O’Brien, the AP Bio TV show is a workplace / high school comedy centering on Jack Griffin (Howerton). An award-winning philosophy scholar, Jack was denied tenure at Harvard because of an incident that ended with an older faculty member throttling him.

Now, he’s back home in Toledo, Ohio, teaching Advanced Placement biology, at Whitlock High School. After making a rather smashing entrance, Jack makes it clear to his students that he won’t be teaching them science, or much of anything, and that’s no teacher’s gimmick. He means it.

A self-involved curmudgeon, Jack is less than thrilled to be back and living in his late mother’s apartment. He can’t get his mind off of his rival, Miles (Bennett), who has a hot new book on the market and chairs the Philosophy department at Stanford.

One day, in the teachers’ lounge, Jack overhears his new colleagues Michelle (Villepique), Mary (Sohn), and Stef (Lewis) talking about how they use their students to get things done. From now on, there’s a new way to make the grade in his class — help Jack ruin Miles’ life.

Meanwhile, Principal Durbin (Oswalt) struggles to stay in charge, while still coming across as a laid-back guy. He can’t quite find his balance, and having Jack back isn’t making anything easier.

What do you think? Do you like the AP Bio TV show? Do you think it should be cancelled or renewed for another season?

I absolutely love this show. It is extremely funny. I haves watched the first series twice. Great cast. Great to see a non pc show.

I would totally love to give AP Bio a 3rd season. But I think The Last Man on Earth needs a 5th season a little more. Of course I would love to give both of these shows another season if a new replacement doesn’t come along! We already lost The Last Man On Earth’s time slot replacement Rel.

This show should be renewed. Great cast and very funny.

This show brings me and my mom together and makes us laugh after our rough work days, please dont cancel this show! Its ACTUALLY funny and entertaining unlike a lot of popular shows

Renew renew renew! This show keeps getting better and better. We love it. Don’t be like ABC and cancel all the good ones.

i like the show but do not renew. its always sunny is much more important to much more people than ap bio would ever be

Hilarious!! do not cancel!!!

I started watching amp bio this year for the first time. I like the show. But what ruins the show IS WAY TOO MANY COMMERCIALS! It when you get constantly interrupted while trying to watch the show makes you want to turn it to another channel.

Do not cancel! So funny!mm

One of the few network comedies that makes me laugh. Do not cancel!