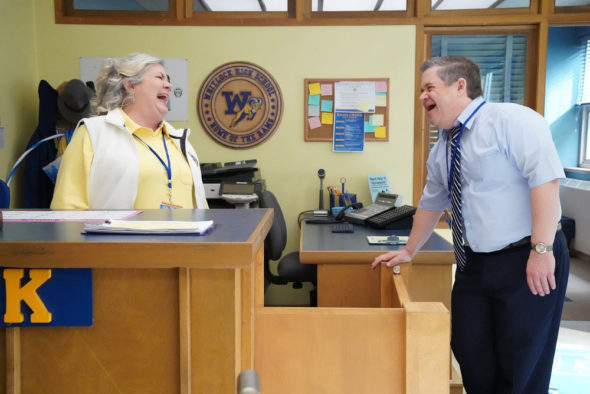 What will the teachers learn in the third season of the AP Bio TV show on Peacock? As we all know, the Nielsen ratings typically play a big role in determining whether a TV show like AP Bio is cancelled or renewed for season four. Peacock and other streaming platforms, however, collect their own data. If you’ve been watching this TV series, we’d love to know how you feel about the third season episodes of AP Bio here.  *Status Update Below.

A Peacock workplace comedy, AP Bio stars Glenn Howerton, Patton Oswalt, Mary Sohn, Lyric Lewis, Jean Villepique, and Paula Pell. After being denied tenure at Harvard, award-winning philosophy scholar Jack Griffin (Howerton) returned home to Toledo, Ohio to lick his wounds. Now, he teaches Advanced Placement biology at Whitlock High, where he convinces his students to do his dirty work for him. Eager to prove that he is still king of the castle, Principal Durbin (Oswalt) struggles to control the force of nature that is Jack Griffin.

What do you think? Which season three episodes of the AP Bio TV series do you rate as wonderful, terrible, or somewhere between? Do you think that AP Bio on Peacock should be cancelled or renewed for a fourth season? Don’t forget to vote, and share your thoughts, below.