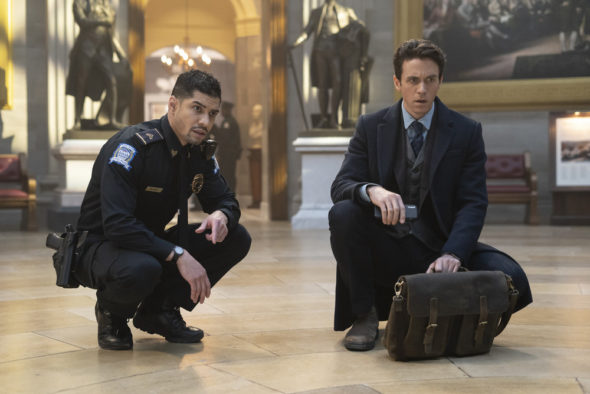 Can Langdon save his mentor in the first season of the Dan Brown’s The Lost Symbol TV show on Peacock? As we all know, the Nielsen ratings typically play a big role in determining whether a TV show like The Lost Symbol is cancelled or renewed for season two. Peacock and other streaming platforms, however, collect their own data. If you’ve been watching this TV series, we’d love to know how you feel about the first season episodes of The Lost Symbol here.  *Status Update Below.

A Peacock thriller drama series, the Dan Brown’s The Lost Symbol TV show is based on Brown’s bestselling novel and stars Ashley Zukerman, Valorie Curry, Sumalee Montano, Rick Gonzalez, Eddie Izzard, and Beau Knapp. The series follows the promising young Harvard professor Robert Langdon (Zukerman) who finds himself pulled into a complex mystery when his former mentor, Peter Solomon (Izzard), is kidnapped. Armed with a deep knowledge of history, symbols, and dead languages, Langdon must work together with Peter’s daughter, Katherine (Curry), and other allies to find the Lost Symbol and thwart a chilling global conspiracy.

What do you think? Which season one episodes of The Lost Symbol TV series do you rate as wonderful, terrible, or somewhere between? Do you think that Dan Brown’s The Lost Symbol on Peacock should be cancelled or renewed for a second season? Don’t forget to vote, and share your thoughts, below.

*1/25/22 update: Dan Brown’s The Lost Symbol has been cancelled on Peacock.

Sorry there won’t be a second season, show was very interesting.

This show is good and interesting. No talking while watching.

I like the show through ep. 3, then Peacock pulls a dirty trick and says to continue you have to upgrade to premium.

Dan Browns series is great, my opinion keep me guessing

Really? Never watched Dan Brown book or saw anything with in this story. Look interesting advertisement,

Disagree. The series is engaging and quite interesting.

Why i think its a great series, suspenceful, thrilling keeps me guessing