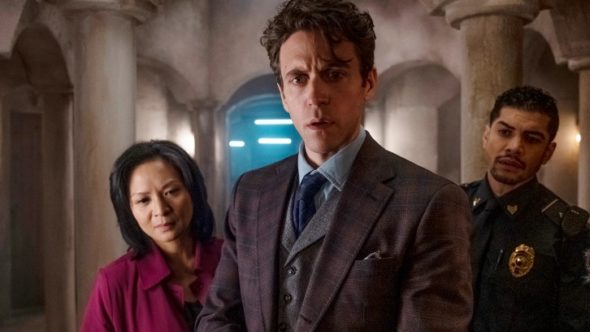 Dan Brown’s Langdon is headed to Peacock. The new thriller series, initially developed for NBC, is based on Brown’s novel, The Lost Symbol, which is a part of the Da Vinci Code series. A premiere date has not yet been set for the series which will star Ashley Zukerman, Valorie Curry, Sumalee Montano, Rick Gonzalez, Eddie Izzard, and Beau Knapp.

“Peacock has ordered the gripping drama thriller Dan Brown’s Langdon to series, based on the world-renowned author’s international bestselling novel The Lost Symbol.

Dan Dworkin and Jay Beattie will serve as writers and executive producers for the series.

The drama project was originally developed by NBC and was ordered to pilot last year by the network.

“The team was blown away by this pilot and its enormous potential to become a big, binge-worthy hit, and our new structure enables us to move it to Peacock and give it every opportunity to make that happen,” said Susan Rovner, Chairman, NBCUniversal Television and Streaming. “Our ability to pick up a great show is no longer limited by the confines of a network schedule, giving us the freedom to say ‘yes’ to shows we love and then find them the perfect home across our portfolio.”

“I’m absolutely thrilled to be working with Ron and Brian again on another Langdon project,” said Dan Brown. “We’ve all wanted to make The Lost Symbol for some time now, and I’m grateful to CBS Studios, Imagine Television Studios, Universal Television and Peacock for joining forces to make this project a reality. Dan Dworkin and Jay Beattie have written a phenomenally captivating script, and the casting and performances are pitch perfect.”

Based on Dan Brown’s international bestselling thriller The Lost Symbol, the series follows the early adventures of famed Harvard symbologist Robert Langdon, who must solve a series of deadly puzzles to save his kidnapped mentor and thwart a chilling global conspiracy.”

What do you think? Are you a fan of Brown’s work? Do you plan to watch the Dan Brown’s Langdon TV series on Peacock when it eventually premieres?

Glad it’s not on Netflix or it would be Langdon the high school years.

I am a huge fan of Dan Brown’s book and I look forward to seeing this series!! I am so happy that Brian Glazer and Ron Howard are apart of this project, this news gives me peace in my heart, knowing this will be quality work. Thank you, thank you!!

Absolutely. I am excited about this Can’t wait