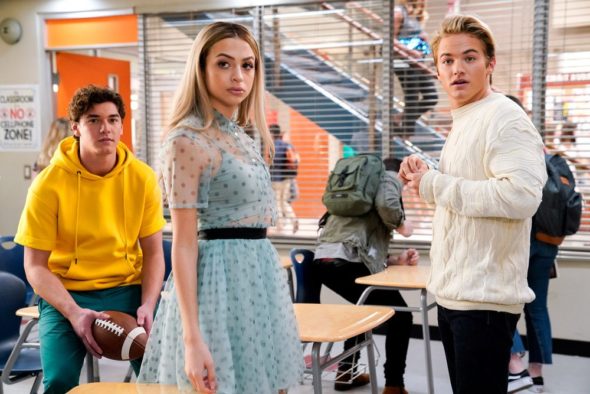 The students of Bayside High are going back to work. The Peacock streaming service has renewed the Saved By the Bell revival series for a second season.

GET SO EXCITED… SEASON TWO IS CALLING!

· Get so excited! Peacock is going back to Bayside and has renewed critically acclaimed comedy SAVED BY THE BELL for a second season. 10 episodes have been ordered.

· “I’m thrilled that SAVED BY THE BELL has been renewed. I’ve been blown away by all the love for the show and can’t wait to go back and make more episodes,” said writer and executive producer Tracey Wigfield. “Hopefully we stay on Peacock for many more seasons, and then in 30 years, somebody does a reboot of our reboot and invents the threeboot.”

· In the reimagined series, when California governor Zack Morris gets into hot water for closing too many underfunded high schools, he proposes they send the affected students to the most well-funded schools in the state – including Bayside High. The influx of new students gives the privileged Bayside kids (who never have a problem that can’t be solved in twenty-two minutes) a much-needed dose of reality.

· Season One addressed many important topics such as race, inclusion, class and education. In the season finale, Daisy (Haskiri Velazquez) stages a walkout in order to keep the Douglas High students at Bayside.

What do you think? Have you watched the new Saved by the Bell TV series? Are you glad that it’s been renewed for a second season?

I still don’t know what audience this new show is going for. If you were a fan of the original series, it has callbacks but does nothing but a disservice to how fun it was. It’s DEFINITELY not Saturday morning material so that’s out…unless kids in their early teens nowadays truly act like that and if they do…I can only weep for the future. So, again, what demographic are they going for? I can’t answer it. If you want to try it out…go for it…but if you are familiar with the original show you need to really lower your expectations.… Read more »

Horrible revival 1990’s sitcom was best classic now ruined tv show why bring back stop it néed to retire bring things from long time ago before my era not born yet.

There’s nothing wrong with reviving an older show just because you weren’t born yet.