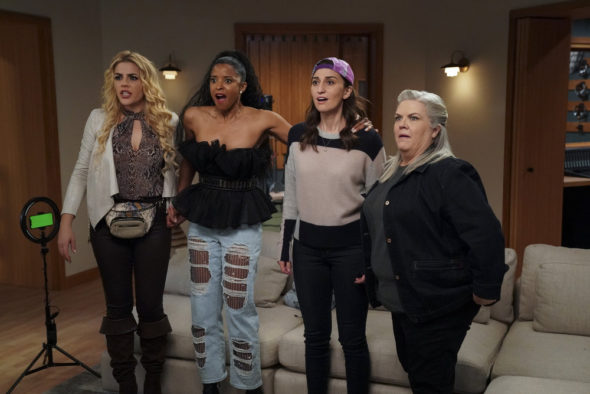 Can the band truly come together in the first season of the Girls5eva TV show on Peacock? As we all know, the Nielsen ratings typically play a big role in determining whether a TV show like Girls5eva is cancelled or renewed for season two. Peacock and other streaming platforms, however, collect their own data. If you’ve been watching this TV series, we’d love to know how you feel about the first season episodes of Girls5eva here. *Status Update Below.

A Peacock musical comedy series, the Girls5eva TV show was created by Meredith Scardino and stars Sara Bareilles, Renée Elise Goldsberry, Paula Pell, and Busy Philipps. When a one-hit-wonder girl group from the 1990s gets sampled by a young rapper, its members reunite to give their pop star dreams one more shot. The band members are chill Dawn (Bareilles), sexy Summer (Philipps), workaholic Gloria (Pell), and fierce Wickie (Goldberry). This may be tougher than expected since the loss of Ashley (Ashely Park), the fifth member of the band who also kept them together. The band also finds that they must navigate the intricacies of a new, more socially conscious society — realizing that their old music wasn’t all that uplifting to young women. Toggling between 1999 and 2021, the story sheds light on their fall from stardom and return to relevance as the women balance spouses, kids, jobs, debt, aging parents, and shoulder pain.

What do you think? Which season one episodes of the Girls5eva TV series do you rate as wonderful, terrible, or somewhere between? Do you think that Girls5eva on Peacock should be cancelled or renewed for a second season? Don’t forget to vote, and share your thoughts, below.

*6/14/21 update: Girls5Eva has been renewed for a second season on Peacock.

I love this show. Really hilarious and sweet.