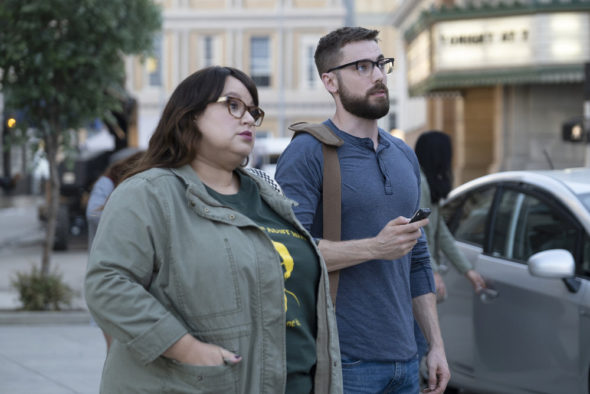 A Peacock single-camera comedy, the Rutherford Falls TV show stars Ed Helms, Jana Schmieding (Cheyenne River Lakota Sioux), Michael Greyeyes (Nêhiyaw from Muskeg Lake Cree Nation), Jesse Leigh, and Dustin Milligan. The story follows Nathan Rutherford (Helms) and Reagan Wells (Schmieding), two lifelong best friends. Nathan is a proud descendant of the town’s founder and he runs the town’s heritage museum. Reagan is a member of the Minishonka Nation and she has dreams of championing the history of her people. The pair find themselves at a crossroads – quite literally – when their sleepy town gets an unexpected wake-up call.

What do you think? Which season one episodes of the Rutherford Falls TV series do you rate as wonderful, terrible, or somewhere between? Do you think that Rutherford Falls on Peacock should be cancelled or renewed for a second season? Don’t forget to vote, and share your thoughts, below.

*7/9/21 update: Rutherford Falls has been renewed for a second season on Peacock.

It’s kinda obvious that the script has pretty much put an end to the relationships in the series. The entire premise is gone and looks like Peacock has buried this one for good.

Rutherford Falls should definitely be renewed. It’s well-written, well-acted, funny, serious, and it makes important points sugar-coated most effectively with humour. The episode where Terry (Michael Greyeyes) delivers what amounts to Rod Steiger’s speech from The Pawnbroker is startling and moving, and especially timely just now. Please don’t cancel this excellent show.