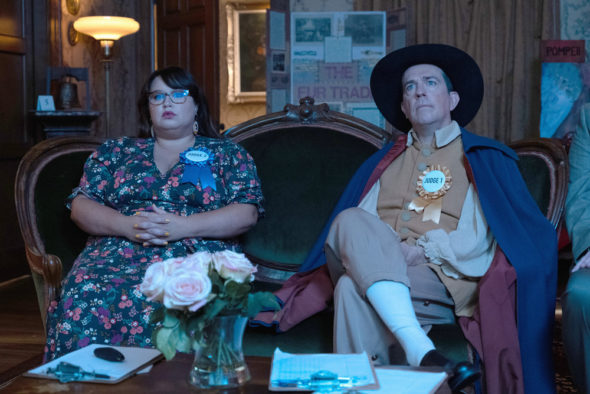 Peacock wants to take us back to Rutherford Falls. The streaming service has renewed the single-camera comedy series for a second season.

Created by Michael Schur, Ed Helms, and Sierra Teller Ornelas, the Rutherford Falls TV show stars Helms, Jana Schmieding (Cheyenne River Lakota Sioux), Michael Greyeyes (Nêhiyaw from Muskeg Lake Cree Nation), Jesse Leigh, and Dustin Milligan. The story follows Nathan Rutherford (Helms) and Reagan Wells (Schmieding), two lifelong best friends. Nathan is a proud descendant of the town’s founder and he runs the town’s heritage museum. Reagan is a member of the Minishonka Nation and she has dreams of championing the history of her people. The two find themselves at a crossroads – quite literally – when their sleepy town gets an unexpected wake-up call.

Here’s the renewal announcement from Peacock:

· Critically-acclaimed Peacock Original comedy series RUTHERFORD FALLS from Universal Television, a division of Universal Studio Group, has been renewed for a second season.

· “We are so proud to be a part of RUTHERFORD FALLS a smart comedy and a breakthrough moment for Native representation in comedy both in front of and behind the camera,” said Lisa Katz, President, Scripted Content, NBCUniversal Television and Streaming. “RUTHERFORD FALLS embodies the modern, original, and inclusive storytelling viewers want and we are excited to develop season two alongside Sierra, Mike, Ed and the incredible cast.”

· “We are thrilled that Peacock has renewed RUTHERFORD FALLS for a second season,” said Erin Underhill, President of Universal Television. “It’s been wonderful to watch Reagan, Nathan, Bobbie, Terry, and the rest of the Rutherford Fallians come to life in this ambitiously witty series. Mike, Sierra and Ed poured their creative geniuses into the show, and we can’t wait to see what happens next.”

· “We are beyond ecstatic for Season 2! I’m probably slightly biased, but RUTHERFORD FALLS is made by the best writers, cast, and crew, on earth. Not to mention Ed Helms and Mike Schur, two of the nicest guys in the business. We are very grateful to the folks at Universal Television and Peacock for continuing to champion Indigenous comedies,” said Co-Creator, Executive Producer and Showrunner Sierra Teller Ornelas.

· RUTHERFORD FALLS represents a breakthrough moment in Native representation in comedy television both in front of and behind the camera.

· Season one of the series has reached a remarkable 94% on Rotten Tomatoes earning “Certified Fresh” status.

· RUTHERFORD FALLS is a comedy about two lifelong best friends, Nathan Rutherford (Ed Helms) and Reagan Wells (Jana Schmieding), who find themselves at a crossroads – quite literally – when their sleepy town gets an unexpected wakeup call.

Check out our status sheets to track new TV series pickups, renewals, and cancellations. You can find lists of cancelled shows here.
What do you think? Have you watched the first season of Rutherford Falls on Peacock? Will you check out season two on the streaming service?

I’m delighted to see that Rutherford Falls will be coming back. It’s one of the best shows on TV, making important points in an easily-acceptable way. It’s also very funny.