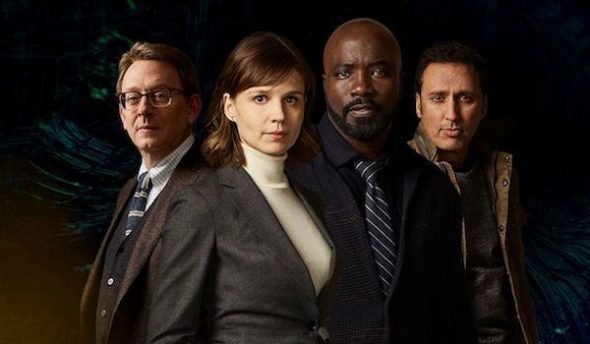 Apparently the move from CBS was a good one for the Evil TV show. The supernatural drama series has been renewed for a third season on the series’ new home, the Paramount+ streaming service. Second season episodes are being released on Sundays.

Evil stars Katja Herbers, Mike Colter, Aasif Mandvi, Michael Emerson, Christine Lahti, Kurt Fuller, Brooklyn Shuck, Skylar Gray, Maddy Crocco, and Dalya Knapp. A forensic psychologist, Kristen Bouchard accepts a job offer from David Acosta (Colter), a former adventure-seeking journalist. He’s now studying to be a Catholic priest and has been tasked by the Church to assess unexplained phenomena. Acosta also recruits Ben Shakir (Mandvi), an even-tempered realist with carpentry skills. He uses those abilities to uncover practical rationales behind “hauntings.” Kristen is certain that science can provide answers to every incident that the trio encounters — until she meets Leland Townsend (Emerson). He’s a sinister man who oozes menace and threatens Kristen and her four young daughters (Shuck, Gray, Crocco, and Knapp). Undeterred, Kristen, David, and Ben set out to assess inexplicable events to see if there’s a logical explanation or if something truly supernatural is at work. The second season brings evil closer to home. Kristen struggles with her darker nature, while David suffers temptation as he gets closer to his ordination. Meanwhile, Ben is visited by night terrors that prey on his greatest fears.

Here’s the renewal announcement from Paramount+:

The First Three Episodes of Season Two of “EVIL” Are Currently Available to Stream on Paramount +; New Episodes Drop Weekly on Sundays

Paramount+, the streaming service from ViacomCBS, today announced that its hit original series, EVIL, was renewed for a third season. The first three episodes of season two of EVIL are currently available to stream on Paramount+. This season is already one of the service’s top acquisition drivers, with viewership growing week over week compared to the first season. New episodes of the 13-episode long second season drop weekly on Sundays, exclusively for Paramount+ subscribers.

EVIL is a psychological mystery that examines the origins of evil along the dividing line between science and religion. The series focuses on a skeptical female psychologist who joins a priest-in-training and a contractor as they investigate the church’s backlog of unexplained mysteries, including supposed miracles, demonic possessions and hauntings. Their job is to assess if there is a logical explanation or if something truly supernatural is at work.

The second season brings evil closer to home. Kristen struggles with her darker nature, while David suffers temptation as he gets closer to his ordination. Meanwhile, Ben is visited by night terrors that prey on his greatest fears.

Check out our status sheets to track new TV series pickups, renewals, and cancellations. You can find lists of cancelled shows here.
What do you think? Have you watched the Evil TV series on Paramount+ or CBS? Are you glad that it’s been renewed for a third season?

The best outcome would be for Evil to keep making seasons and to stream “last season” episodes on something everyone has–I got Paramount Plus exclusively for Evil.

But I understand that people don’t want to add another dedicated stream. There are some I would like, but I wait to see the movie or show second run.

Could not resist getting Evil. But no one wants all the streams–that’s nuts!

Didn’t expect that but wow! 🙂

Love that Evil got a season three signing !

I love this show and am happy about its renewal, but why do they have to put it on Paramount Plus? I have CBS but can’t afford to pay for Paramount Why can’t Evil just stay on CBS?