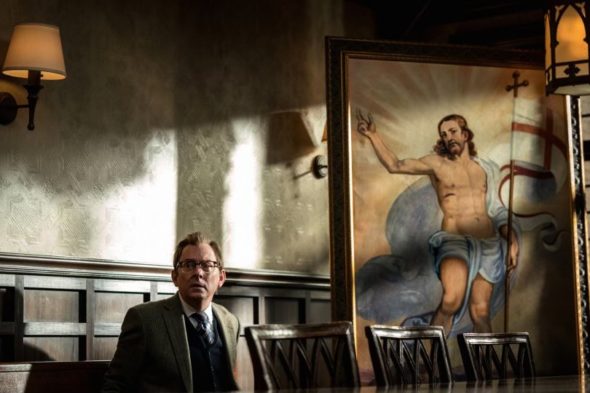 What surprises are in store for the second season of the Evil TV show on Paramount+? As we all know, the Nielsen ratings typically play a big role in determining whether a TV show like Evil is cancelled or renewed for season three. Paramount+ and other streaming platforms, however, collect their own data. If you’ve been watching this TV series, we’d love to know how you feel about the second season episodes of Evil here.  *Status Update Below.

A Paramount+ supernatural drama series (which began on CBS), the Evil TV show stars Katja Herbers, Mike Colter, Aasif Mandvi, Michael Emerson, Christine Lahti, Kurt Fuller, Brooklyn Shuck, Skylar Gray, Maddy Crocco, and Dalya Knapp. A forensic psychologist, Kristen Bouchard accepts a job offer from David Acosta (Colter), a former adventure-seeking journalist. He’s now studying to be a Catholic priest and has been tasked by the Church to assess unexplained phenomena. Acosta also recruits Ben Shakir (Mandvi), an even-tempered realist with carpentry skills. He uses those abilities to uncover practical rationales behind “hauntings.” Kristen is certain that science can provide answers to every incident that the trio encounters — until she meets Leland Townsend (Emerson). He’s a sinister man who oozes menace and threatens Kristen and her four young daughters (Shuck, Gray, Crocco, and Knapp). Undeterred, Kristen, David, and Ben set out to assess inexplicable events to see if there’s a logical explanation or if something truly supernatural is at work. The second season brings evil closer to home. Kristen struggles with her darker nature, while David suffers temptation as he gets closer to his ordination. Meanwhile, Ben is visited by night terrors that prey on his greatest fears.

What do you think? Which season two episodes of the Evil TV series do you rate as wonderful, terrible, or somewhere between? Do you think that Evil on Paramount+ should be cancelled or renewed for a third season? Don’t forget to vote, and share your thoughts, below.

*7/9/21 update: Evil has been renewed for a third season on Paramount+.

You remember at the end of season 1 when we start finding out the devil has been a sperm donor …. Now we know where all the grown up kids are – in TV programming decision office!!

For the last 2 years, Evil fans waited for its 2nd season only for it to be removed from its local TV network (that being CBS) only to be shown on Paramount+. Seriously? Why? What was the point of removing a local show to be shown online? Surely, I am not the only viewer in general, who is sick of Viacom CBS removing popular shows from local and cable channels to be shown on Paramount+ and other online streaming sites for money. It’s a total waste of time and money for viewers, who already pay for cable and satellite packages,… Read more »

Please renew for Season 3. My husband and I absolutely love this show. We were hooked after watching the first episode. Awesome actors, especially Michael Emerson. We’ve followed him since his character Ben on Lost. He’s AWESOME!!! Hats off to the actors and actresses of this show. Love, Love , Love!

I see Love Island is going that route for the episode on 7/13. It’s a dippy show but still entertaining. Like you guys, I’m not paying Paramount+. I wondered when something like this was going to happen.

Love this show its comedy and horror

I really liked ‘Evil but not paying paramount

Please renew for 3 one of the greatest shows out. Stop canceling good shows!!!!

The 2nd season of Evil may be terrific. Too bad I won’t see it because I refuse to pay for it.

Wish that they would just put it back on CBS.
I love the show EVIL but like you I have no desire to pay for Paramount +. I couldn’t afford cable that’s why I watched it on regular TV. Put EVIL back on CBS where it belongs. Then we can probably have a season 3 keeping it on Paramount + there is a chance there won’t be a season 3.

I love how CBS was so quick to dump Evil and suddenly replaced it with Clarice. What’s that all about? It has literally been 3 decades since the release of Silence Of The Lambs. When that movie was hot and collecting Oscars, they should’ve made Clarice back then. Why wait 3 decades after the fact to make that show and why did CBS replace Evil for Clarice? This only proves that Hollywood filmmakers and screenwriters have NO originality and creativity and that online streaming sites want to purge viewers from watching TV. Little do these geniuses running these streaming sites… Read more »

I loved Evil but I want it back on CBS or another cable station!!!!!

I love EVIL also but on CBS. I am a senior who can’t afford to have cable so I watch the regular local channels. Please put EVIL back on CBS so it has a chance of having a 3rd season. If you keep it on Paramount + I am afraid it won’t get a chance for a 3rd season cause alot of people like me will not purchase the Paramount + channel and miss out on enjoying a very entertaining program.