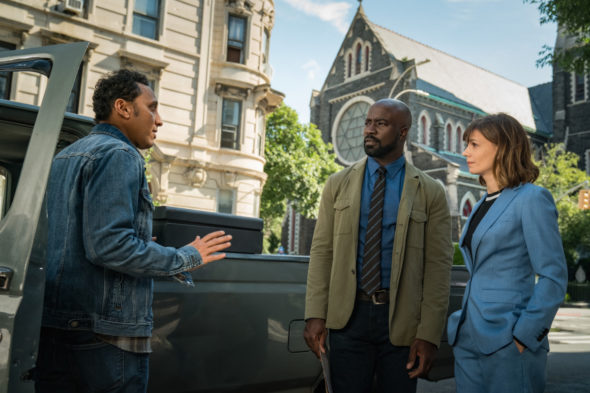 Can a show about evil be good? Has the Evil TV show been cancelled or renewed for a second season on CBS? The television vulture is watching all the latest cancellation and renewal news, so this page is the place to track the status of Evil, season two. Bookmark it, or subscribe for the latest updates. Remember, the television vulture is watching your shows. Are you?

Airing on the CBS television network, Evil stars Katja Herbers, Mike Colter, Aasif Mandvi, Michael Emerson, Christine Lahti, Kurt Fuller, Brooklyn Shuck, Skylar Gray, Maddy Crocco, and Dalya Knapp. A forensic psychologist, Kristen Bouchard accepts a job offer from David Acosta (Colter), a former adventure-seeking journalist. He’s now studying to be a Catholic priest and has been tasked by the Church to assess unexplained phenomena. Acosta also recruits Ben Shakir (Mandvi), an even-tempered realist with carpentry skills. He uses those abilities to uncover practical rationales behind “hauntings.” Kristen is certain that science can provide answers to every incident that the trio encounters — until she meets Leland Townsend (Emerson). He’s a sinister man who oozes menace and threatens Kristen and her four young daughters (Shuck, Gray, Crocco, and Knapp). Undeterred, Kristen, David, and Ben set out to assess inexplicable events to see if there’s a logical explanation or if something truly supernatural is at work.

The first season of Evil is averaging a 0.53 rating in the 18-49 demographic and 3.57 million viewers. Find out how Evil stacks up against other CBS TV shows.

Will CBS cancel or renew Evil for season two? The ratings haven’t been very good but I suspect CBS really wants this show to succeed and will give it time to prove itself worthy of renewal. For now, I’ll keep an eye on the ratings and update this page with breaking developments. Subscribe for free alerts on Evil cancellation or renewal news.

What do you think? Are you glad that the Evil TV show has been renewed for a second season? How would you feel if CBS had cancelled this TV series, instead?

Very very disapointed with CBS People have been waiting for so long for thr return of EVIL Season 2. CBS puts it on Paramount + Many of us now cannot watch it because we cant afford it. Shame on you CBS

Better not cancel this show on me..it’s one of my favorites. If the ratings are low it needs more advertising, and telling people the 10oclock slot is cause it’s explicit and has a horror type theme…not a low rate show. If they end it after two seasons…gotta end it right. Nothing is worse than shows without proper endings. Sure everyone has their own list of those

Evil is a great program and glad it is returning to the regular network. Professionally done with great actors in the cast.

You keep s a Ying Evil will return. Where is it?
Bring it back please. I have been waiting for months.
To see it!!