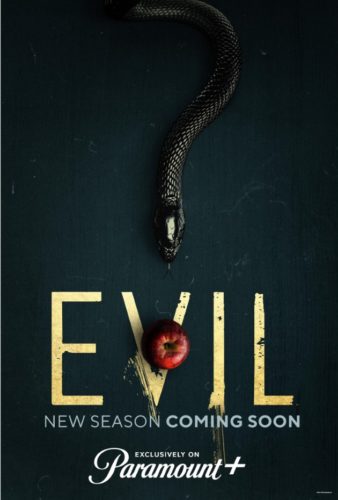 Evil is returning this fall. The supernatural drama series aired to low ratings in the 2019-20 season and was renewed for a second year. Production was delayed due to the pandemic so it didn’t return as expected during the current 2020-21 season. Now, we have confirmation that it’s coming back but the show will have a new home.

Evil stars Katja Herbers, Mike Colter, Aasif Mandvi, Michael Emerson, Christine Lahti, Kurt Fuller, Brooklyn Shuck, Skylar Gray, Maddy Crocco, and Dalya Knapp. A forensic psychologist, Kristen Bouchard accepts a job offer from David Acosta (Colter), a former adventure-seeking journalist. He’s now studying to be a Catholic priest and has been tasked by the Church to assess unexplained phenomena. Acosta also recruits Ben Shakir (Mandvi), an even-tempered realist with carpentry skills. He uses those abilities to uncover practical rationales behind “hauntings.” Kristen is certain that science can provide answers to every incident that the trio encounters — until she meets Leland Townsend (Emerson). He’s a sinister man who oozes menace and threatens Kristen and her four young daughters (Shuck, Gray, Crocco, and Knapp). Undeterred, Kristen, David, and Ben set out to assess inexplicable events to see if there’s a logical explanation or if something truly supernatural is at work.

It’s been announced that the second season of Evil will be released as a Paramount+ exclusive series and won’t be seen on CBS in the fall. SEAL Team, which is currently in its fourth season, is also moving to the streaming service for its fifth year.

Here’s the announcement from Paramount+ about the TV shows’ moves:

Both Series Are Produced by CBS Studios

May 18, 2021 – Paramount+, the streaming service from ViacomCBS, today announced that the new seasons of CBS dramas EVIL and SEAL TEAM will be available exclusively on Paramount+. The move to Paramount+ from the CBS Television Network follows the series’ success on Paramount+, with SEAL TEAM ranking among the most-watched CBS dramas on the service this season, and EVIL ranking similarly as one of the most-watched during its debut season last year.

“Our Studio and Network have a strong track record of developing high-quality dramas that have multiplatform success, and these series speak to that strength,” said George Cheeks, President & CEO of the CBS Entertainment Group. “These moves mark another example of how our linear and streaming ecosystem can strategically work together to maximize value for the content and benefit the series and its creators.”

“We are thrilled to bring new seasons of these phenomenal series to Paramount+,” said Julie McNamara, Executive Vice President and Head of Programming, Paramount+. “We have a strong record of building incredible audiences with these creative teams, including Robert and Michelle King’s incomparable THE GOOD FIGHT, and look forward to bringing our subscribers even more seasons of series they love.”

The fifth season of SEAL TEAM will debut with a special presentation on the CBS Television Network this fall before moving exclusively to Paramount+. The second season of EVIL will debut exclusively on the service. In addition, prior seasons of both series are available to stream now on Paramount+.

EVIL
EVIL is a psychological mystery that examines the origins of evil along the dividing line between science and religion. The series focuses on a skeptical female psychologist who joins a priest-in-training and a contractor as they investigate the Church’s backlog of unexplained mysteries, including supposed miracles, demonic possessions and hauntings. Their job is to assess if there is a logical explanation or if something truly supernatural is at work.

SEAL TEAM
SEAL TEAM is a military drama that follows the professional and personal lives of the most elite unit of Navy SEALs as they train, plan and execute the most dangerous, high-stakes missions our country can ask of them. Jason Hayes is the respected, intense leader of the Tier One team whose home life has suffered as a result of his extensive warrior’s existence. His team includes his trusted confidant, Ray Perry, the longest-tenured operator with whom Jason shares an ingrained shorthand; Sonny Quinn, an exceptional, loyal soldier with a checkered past who still combats self-destructive tendencies; and Clay Spenser, a young, multilingual, second-generation SEAL with insatiable drive and dedication. Vital to the team’s success is Ensign Lisa Davis, a no-nonsense, take-charge officer. Deployed on clandestine missions worldwide at a moment’s notice – and knowing the toll it takes on them and their families – this tight-knit SEAL team displays unwavering patriotism and fearless dedication even in the face of overwhelming odds.

About Paramount+
Paramount+, a direct-to-consumer digital subscription video on-demand and live streaming service from ViacomCBS, combines live sports, breaking news, and a mountain of entertainment. The premium streaming service features an expansive library of original series, hit shows and popular movies across every genre from world-renowned brands and production studios, including BET, CBS, Comedy Central, MTV, Nickelodeon, Paramount Pictures and the Smithsonian Channel. The service is also the streaming home to unmatched sports programming, including every CBS Sports event, from golf to football to basketball and more, plus exclusive streaming rights for major sports properties, including some of the world’s biggest and most popular soccer leagues. Paramount+ also enables subscribers to stream local CBS stations live across the U.S. in addition to the ability to stream ViacomCBS Streaming’s other live channels: CBSN for 24/7 news, CBS Sports HQ for sports news and analysis, and ET Live for entertainment coverage.

What do you think? Did you enjoy the Evil TV series on CBS? Do you plan to check out season two when it’s released on the Paramount+ service?

I really loved this show and I’m so disappointed that I will no longer be able to watch it on CBS. I do not get paramount and think I should stop watching any series for fear that I will be left hanging. From now on, I will only watch any drama in movies that I get on my cable channels. You guys suck.