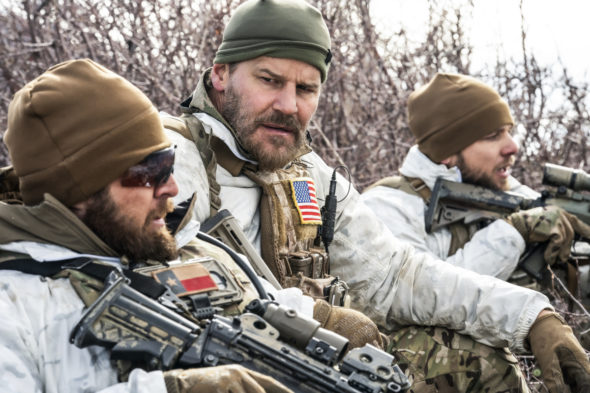 There’s more work for these Navy SEALs to do in the 2021-22 television season. The SEAL Team TV show has been renewed for a fifth season but is moving from CBS to Paramount+.

SEAL Team stars David Boreanaz, Max Thieriot, Neil Brown Jr., AJ Buckley, and Toni Trucks with Justin Melnick, Tyler Grey, Scott Foxx, and Judd Lormand in recurring roles. The military action-adventure series centers on an exclusive Navy SEAL unit as they train for, plan, and risk their very lives to carry out perilous missions for the sake and honor of their country. Fierce and focused Jason Hayes (Boreanaz) leads the Tier One team. Despite the hardship it causes them and their families, this SEAL team is ready, willing, and able to embark upon secret missions at the drop of a hat. Team members include Jason’s trusted confidant, Ray Perry (Brown Jr.); loyal yet self-destructive Sonny Quinn (Buckley); and young Clay Spenser (Thieriot), a multilingual and second-generation SEAL. Others who are vital to the team’s success are no-nonsense Ensign Lisa Davis (Trucks) and troop commander Lt. Cdr. Eric Blackburn (Lormand).

Airing on Wednesday nights on CBS, the fourth season of SEAL Team averages a 0.48 rating in the 18-49 demographic and 3.95 million viewers in the live+same day ratings. Compared to season three, that’s down by 27% in the demo and down by 20% in viewership.

Though the military drama has a devoted following, it’s one of the lower-rated scripted series on the network. While procedural dramas do very well when sold in International markets, SEAL Team isn’t as popular, reportedly because it focuses on the U.S. military and isn’t as relatable to audiences outside the States. It’s been in danger of being cancelled each year for a while.

The series does very well in streaming so, the fifth season will launch on CBS in the fall but, after four episodes, will then move to Paramount+ as an exclusive.  Prior seasons of SEAL Team are already available on the service. According to a comment by Cudlitz, fifth season episodes will be longer.

Check out our status sheets to track new TV series pickups, renewals, and cancellations. You can find lists of cancelled shows here.
What do you think? Do you enjoy the SEAL Team TV series? Will you be watching season five on Paramount+ in the fall? Will you be sorry to see the show leave broadcast television?

Love seal team. Sad to see CBS dropped it and now we have to pay Paramount to watch it. But we did because it is our favorite show. I feel this show is more realist ,authentic thsn most shows. Actors are all awesome their performance are exceptional,love it. Thanks for not cancelling.

Frustrating to know that the series will be moving to a streaming channel which we refuse to pay for. So, I guess that’s it for us…

I absolutely love Seal Team and am pissed off that I can’t watch it anymore. Not everyone has the means to pay extra for 1 show shame on you CBS