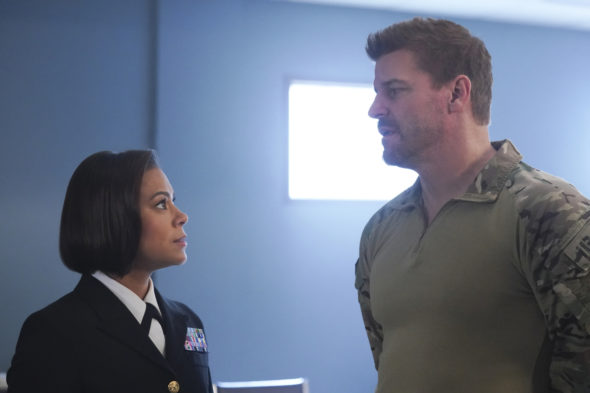 SEAL Team is currently on a bit of a break on CBS, but the series is adding to its cast for upcoming season. Rachel Boston and Tim Chiou have joined the series in recurring roles, per Deadline.

David Boreanaz stars in the CBS series, which follows lives of a team of Navy SEALS. Max Thieriot, Neil Brown Jr., Toni Trucks, Jessica Paré and Judd Lormand also appear on the drama. The series takes viewers inside for a look at the lives at home and in the field.

Deadline shared the following about the roles the new additions will play on SEAL Team:

Chiou will portray Michael ‘Dirty Mike’ Chen, a seasoned, hard-charging SEAL Team operator who loves the life of a warfighter. Independent and resistant to society’s norms, he is a bit of a wildcard who pushes Bravo Team’s buttons.”

SEAL Team will return from its hiatus on February 26.

What do you think? Are you a fan of SEAL Team? Are you excited about these new additions?

Seal Team is another one of my favorite TV shows!!!
Please don’t cancel it!!!

Great Show. I was elated to hear Seal Team was renewed for a fourth season. Awesome!

I was elated to hear that CBS has renewed Seal Team for a fourth season. This show is by far the best show CBS or any network has aired (my opinion). Great move for CBS!

We really enjoy this show.

Glad to hear it’s scheduled to be back on this month. It has been on its hiatus long enough. Miss it terribly when it’s on an extended time. One of the very best on TV!!!

Waiting for Seal Team. Looking forward to seeing it again. Best show ever on TV

Can!t wait for,the show to return! Great drama, one of the best on tv!

I am so glad SEAL team is back. Cant wait for it to start