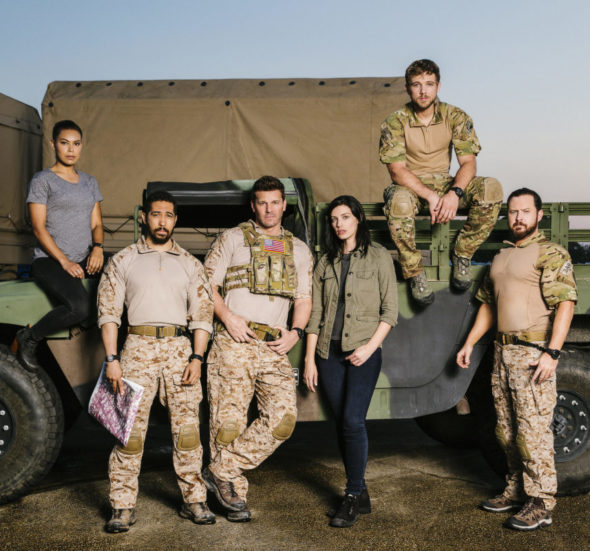 TV show description:
A military drama, the SEAL Team TV show centers on an exclusive Navy SEAL unit as they train for, plan, and risk their very lives to carry out perilous missions for the sake and honor of the U.S.A. Fierce and focused Jason Hayes (Boreanaz) leads the Tier One team. His personal life takes a backseat to his military service and suffers as a result.

Ray Perry (Brown) is Jason’s confidant. After serving together for so long, the two have their own way of communicating with one another and a relationship built on trust and time. Meanwhile, Sonny Quinn (Buckley) is a highly-skilled, loyal soldier whose reputation might be a bit frayed around the edges. He generally has to resist his worst inclinations to act against his own best interests.

Young Clay Spenser (Thieriot) is a second general SEAL and aspires to join Hayes’ unit. This multi-lingual young man is nothing if not driven and dedicated.

Rounding out the team are logistics officer Lisa Davis (Trucks), who makes sure they have everything they need for their assignments, as well as CIA analyst Mandy Ellis (Paré), who willingly sacrifices whatever necessary, to thwart terrorists and rid the world of malevolent threats.

Despite the hardship it causes them and their families, this SEAL team is ready, willing, and able to embark upon secret missions at the drop of a hat. Their love of country and deep resolve is unmatched.

What do you think? Do you like the SEAL Team TV series? Should this TV show be cancelled or renewed for another season on Paramount+?

Great show!!! We should be proud as Americans that our most elite fighting force is shown for the true warriors they are. These actors do an incredible job of telling the SEAL story!

Please do not cancel it’s definitely worth more seasons