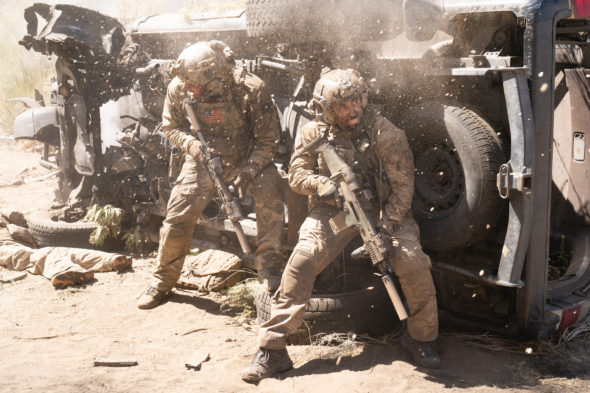 The stakes remain high in the sixth season of the SEAL Team TV show on Paramount+. As we all know, the Nielsen ratings typically play a big role in determining whether a TV show like SEAL Team is cancelled or renewed for season seven. Paramount+ and other streaming platforms, however, collect their own data. If you’ve been watching this TV series, we’d love to know how you feel about the sixth season episodes of SEAL Team here. *Status Update Below.

A Paramount+ military drama series, the SEAL Team TV show stars David Boreanaz, Max Thieriot, Neil Brown, Jr., A.J. Buckley, Toni Trucks, and Raffi Barsoumian. The military action-adventure series centers on an exclusive Navy SEAL unit as they train for, plan for, and risk their lives to carry out perilous missions for the sake and honor of their country. Despite the hardship it causes them and their families, this SEAL team is ready, willing, and able to embark upon secret missions at the drop of a hat. Fierce and focused Jason Hayes (Boreanaz) leads the Tier One team. Team members include Jason’s trusted confidant, Ray Perry (Brown Jr.); loyal yet self-destructive Sonny Quinn (Buckley); young Clay Spenser (Thieriot), a multilingual and second-generation SEAL; and Omar Hamza (Barsoumian), a senior chief with fifteen years of experience as a SEAL, he’s the son of Syrian immigrants with a deep understanding of the Middle East. No-nonsense DEVGRU Intelligence Officer Lisa Davis (Trucks) is assigned primarily to Bravo Team. Deployed on clandestine missions worldwide at a moment’s notice and knowing the toll it takes on them and their families, this tight-knit SEAL team displays unwavering patriotism and fearless dedication even in the face of overwhelming odds.

What do you think? Which season six episodes of the SEAL Team TV series do you rate as wonderful, terrible, or somewhere between? Do you think that SEAL Team on Paramount+ should be cancelled or renewed for a seventh season?

*1/19/23 update: SEAL Team has been renewed for a seventh season by Paramount+.

If you love this show, didn’t vote 10 out of 10 and it’s not renewed it’s your own fault.
Put your current feelings aside and vote for its return.
Love it even more now.

I love this show, Seal Team! Every episode is great. Please don’t cancel this show ever!