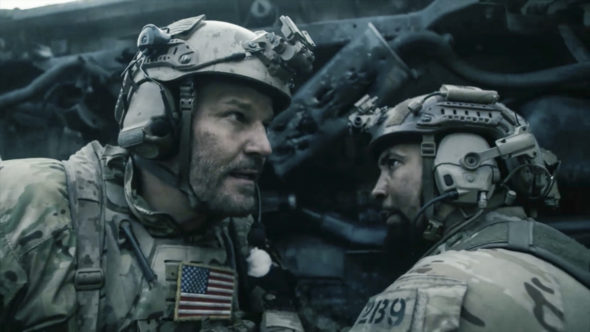 The Bravo Team is going to be extra busy. Paramount+ is expanding the SEAL Team TV show franchise and has ordered a movie. The military drama was recently renewed for a sixth season.

An action series, the SEAL Team TV show stars David Boreanaz, Max Thieriot, Neil Brown Jr., AJ Buckley, and Toni Trucks. The military action-adventure series centers on an exclusive Navy SEAL unit as they train for, plan, and risk their very lives to carry out perilous missions for the sake and honor of their country. Fierce and focused Jason Hayes (Boreanaz) leads the Tier One team. Despite the hardship it causes them and their families, this SEAL team is ready, willing, and able to embark upon secret missions at the drop of a hat. Team members include Jason’s trusted confidant, Ray Perry (Brown Jr.); loyal yet self-destructive Sonny Quinn (Buckley); and young Clay Spenser (Thieriot), a multilingual and second-generation SEAL. No-nonsense DEVGRU Intelligence Officer Lisa Davis (Trucks) is assigned primarily to Bravo Team.

SEAL Team ran for four seasons on CBS and, though it has a devoted fan base, it struggled in the ratings and was at risk of being cancelled. The series was picked up for a fifth season last spring but moved to Paramount+ as an exclusive.

CBS aired the first four episodes of the season as a “special presentation”, no doubt to entice viewers to subscribe to see the rest of the episodes. SEAL Team has reportedly done well for Paramount+ and the streamer renewed the show for a sixth season earlier this month. There will be just 10 episodes this time around, a typical order for streaming services.

Paramount+ has now announced that a movie will also be produced for the service. It’s unclear when it will be released but it’s described as a standalone feature so it won’t bridge between the fifth and sixth seasons. The movie will come from the series creative team of Boreanaz, Christopher Chulack, and Spencer Hudnut. Additional details will be released in the future.

On social media, Boreanaz said of the movie announcement, “Wheels up! Here we go. Excited to bring this to the next level.”

What do you think? Have you been watching SEAL Team on Paramount+ or, did you say goodbye when it left CBS? Are you looking forward to watching the sixth season and the movie?

Love the show! I was already signed up for CBS All Access/Paramount+ so I didn’t mind the switch. I’m actually enjoying watching without ads AND with “adult language” because what SEAL doesn’t swear?! I’m happy to hear that there will be a season 6 and a movie. Additionally, congratulations to Max for his pilot! I do hope he can do both though!!

So glad there will be a sixth season. And a movie.

Cannot afford Paramount+..so we do not get to watch anymore. We were devoted to watching when it was on Channel 46.

I think they have a version for $4.99/month, if that’s affordable.

I love this show. I’m very happy to save up the episodes so I can binge.

As a veteran of Vietnam I love this series and have watched it since it’s debut. It is even one of my wife’s favorite shows also.

Thank you for your service!

Seal Team is the only reason that I subscribe to Paramount+. Once Seal Team gets canceled, so will my subscription

I’m glad they are back. If they get cancelled I will cancel paramount plus. So please keep them going

I loved Seal Team also. At least I can watch previous episodes over again on CW Sunday nights at 7 PM. My cable bill is already $210/month, so I won’t pay for streaming services.

Didn’t hesitate to pick up Paramount+ in order to maintain my Seal Team loyalty. Also, a huge bonus with P+ is the new Star Trek series “Strange New Worlds” starting soon as well as the Yellowstone prequel, “1883”, a powerful drama airing now. Never thought I’d be streaming but well worth it.

I love this show and I added Paramount + to my home as soon as this moved over to it.

Hopefully, they don’t change any of the actors for the overhyped megastars we’re so bored of.
Take the new Jack Reacher! Get the hint Hollywood?
My autistic brain thinking differently.

Love this show! I hope it continues for another 6 seasons! Looking forward to seeing the movie when it comes out.

Only getting 10 episodes in season 6.