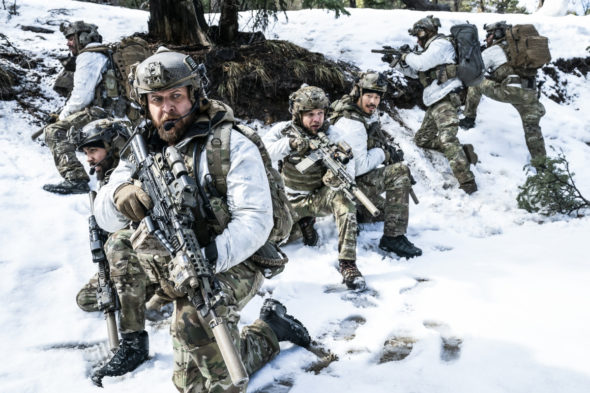 What’s next for the brave members of this Navy family? Has the SEAL Team TV show been cancelled or renewed for a fifth season on CBS? The television vulture is watching all the latest cancellation and renewal news, so this page is the place to track the status of SEAL Team, season five. Bookmark it, or subscribe for the latest updates. Remember, the television vulture is watching your shows. Are you?

Airing on the CBS television network, SEAL Team stars David Boreanaz, Max Thieriot, Neil Brown Jr., AJ Buckley, and Toni Trucks, with Justin Melnick, Tyler Grey, Scott Foxx, and Judd Lormand in recurring roles. The military action-adventure series centers on an exclusive Navy SEAL unit as they train for, plan, and risk their very lives to carry out perilous missions for the sake and honor of their country. Fierce and focused Jason Hayes (Boreanaz) leads the Tier One team. Despite the hardship it causes them and their families, this SEAL team is ready, willing, and able to embark upon secret missions at the drop of a hat. Team members include Jason’s trusted confidant, Ray Perry (Brown Jr.); loyal yet self-destructive Sonny Quinn (Buckley); and young Clay Spenser (Thieriot), a multilingual and second-generation SEAL. Others who are vital to the team’s success are no-nonsense Ensign Lisa Davis (Trucks) and troop commander Lt. Cdr. Eric Blackburn (Lormand).

The fourth season of SEAL Team averaged a 0.48 rating in the 18-49 demographic and 3.93 million viewers. Compared to season three, that’s down by 27% in the demo and down by 20% in viewership. Find out how SEAL Team stacks up against other CBS TV shows.

Will CBS cancel or renew SEAL Team for season five? While this drama is typically a middle-of-the-road performer for the network, I’m leaning toward a renewal. I wouldn’t be shocked by a cancellation either though. The show is expensive to produce and isn’t as popular in international markets as procedural dramas, likely because it focuses on U.S. military storylines. I’ll update this page with breaking developments. Subscribe for free alerts on SEAL Team cancellation or renewal news.

5/18/2021 update: SEAL Team has been renewed for a fifth season but is moving to Paramount+.

What do you think? Are you glad that the SEAL Team TV show has been renewed for a fifth season? Will you follow the show to Paramount+?

Absolutely! Great show! We’ve signed up for Paramount+ because we want to keep watching it!!!!

I love the Seal Team but can you please release Ray and Clay from the show as no longer want them on the show.

I am very upset they took seal team off CBS sucks

We will not be able to watch one of our top 3 shows. DirecTV is already a lot of money…not paying for Paramount +. At least stream it on a free service! Very disappointed…