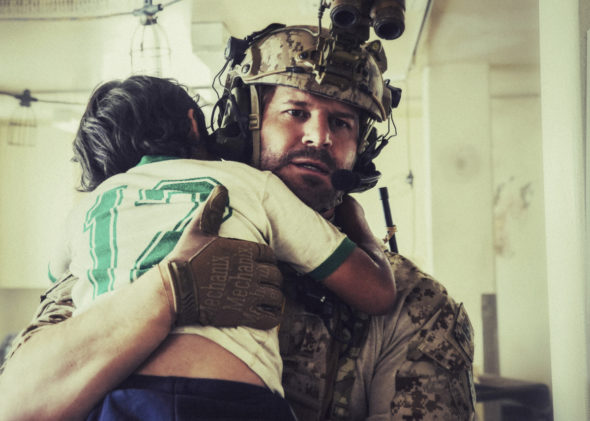 Is it finally time for Jason Hayes and the Tier One team to return home? Has the SEAL Team TV show been cancelled or renewed for a second season on CBS? The television vulture is watching all the latest TV cancellation and renewal news, so this page is the place to track the status of SEAL Team, season two. Bookmark it, or subscribe for the latest updates. Remember, the television vulture is watching your shows. Are you?

Airing on the CBS television network, SEAL Team stars David Boreanaz, Max Thieriot, Neil Brown Jr., AJ Buckley, Toni Trucks, Jessica Paré, and Judd Lormand. The military action drama series centers on an exclusive Navy SEAL unit as they train for, plan, and risk their very lives to carry out perilous missions for the sake and honor of the U.S.A. Fierce and focused Jason Hayes (Boreanaz) leads the Tier One team. Despite the hardship it causes them and their families, this SEAL team is ready, willing, and able to embark upon secret missions at the drop of a hat. Their love of country and deep resolve is unmatched.

The first season of SEAL Team averaged a 1.01 rating in the 18-49 demographic and 6.66 million viewers. Find out how SEAL Team stacks up against the other CBS TV shows.

Although it premiered with positive ratings, the numbers have fallen quite a bit. Will CBS cancel or renew SEAL Team for season two? I still expect this show to get a second season renewal — maybe with some creative changes. The network needs new dramas and this one fits in really well with the rest of the CBS schedule. I will keep an eye on the Nielsens and update this page with breaking developments. Subscribe for free updates on any SEAL Team cancellation or renewal news.


What do you think? Do you hope the SEAL Team TV show will be renewed for a second season? How would you feel if CBS cancelled this TV show, instead?

Please don’t cancel this show it is the best I look forward to it each week. I have been looking for it but hasn’t seen nothing about it. Love the whole crew. Let’s America know what they are all doing to keep us safe. Please y’all go back to work

Please renew Seal Team for Season 3! CBS needs a high impact drama and Seal Team is the show. This show has a huge following, including Veterans who watch the show as well as work on the show behind the scenes. Do us a favor and make CBS the place to watch good TV!

The most realistic military show I’ve ever seen. Please keep it going!!

please keep seal on tv. my husband and I love this show. he is retired Navy and can relate to some of the shows. please keep it going. my life will be much improved you do.

I hope you renew seal team 6

I vote yes for season 2 of Seal Team.

This the only TV show I follow. Please do not cancel this show. This show has great potential.

I’m South African and my family and friends love this TV show every Wednesdays on M-Net HD channel 101, and can’t wait for season 2 to start, I’ve watched every episode like 5 to 6 times over and over when I get a break, my friend can’t stop asking me every time we meet up at our local pool house if I watched this or that episode, I have every episode recorded on my DSTV Explorer and on my Personal Hard drive from season 1, can’t wait for Season 2, 3, etc to start, so please we beg you CBS… Read more »

Please do not cancel Seal Team Series. It is a show that needs to continue, there are so many more things the team can do and get into. Use your ratings and the amount of people that are watching and waiting to know if it’s coming back. You got a winner there, don’t blow it and take a good program off the air.