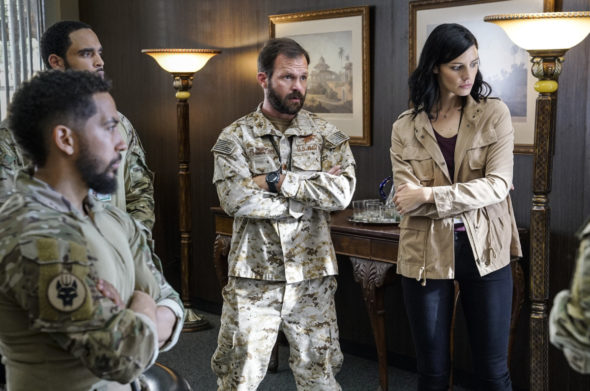 Is the Tier One team still number one in your book, during the second season of the SEAL Team TV show on CBS? As we all know, the Nielsen ratings typically play a big role in determining whether a TV show like SEAL Team is cancelled or renewed for season three. Unfortunately, most of us do not live in Nielsen households. Because many viewers feel frustrated that their viewing habits and opinions aren’t considered, we’d like to offer you the chance to rate all of the SEAL Team season two episodes for us here. *Status update below.

What do you think? Which season two episodes of the SEAL Team TV series do you rate as wonderful, terrible, or somewhere between? Should CBS cancel or renew SEAL Team  for a third season? Don’t forget to vote, and share your thoughts, below.

What a bummer…one of the best shows on tv, and it is gone! Replaced by Survivor and Mystery Singer. Go figure. A chance to show the world what our special forces are capable of, and it gets the ax.

I cannot believe I show that finally hit CBS that seems to be hit and it is very good drama wise, you guys can’t get your stuff together to get it renewed. This is typical CBS. At least they got part of the acronym is right this is BS. In a time when our youth don’t know the meaning of pride or respect we need to show like this to at least show them what our servicemen do.

We love this show! Great acting, adventure, suspense and entertainment.

This is the best military drama on tv in the last several years. The Seal Team is a tight knit group who not only work together but also have tight personal bonds.

LOVE THIS SHOW… YOU ALL HIT ON TOPICS THAT NEED TO BE TOLD… GREAT WRITING… GREAT CAST…
THANK YOU FOR RENEWING SEAL TEAM… GOD BLESS OUR MILITARY… THEIR FAMILIES AND THE U.S.A.
I APPRECIATE MY FREEDOM…

Best show ever on TV! And it improves with repeated watching. Phenomenal!

Absolutely THE BEST SHOW ON TV! I really wish the episodes were two hours long! Is it possible to extend the time?

I vote for renewal.