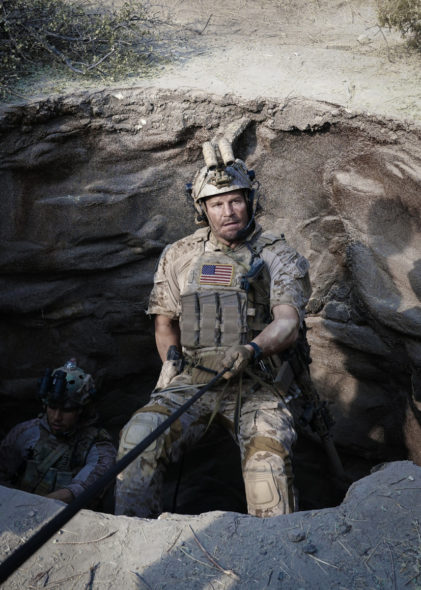 Do Jason Hayes and the Tier One team still stand at the ready? Has the SEAL Team TV show been cancelled or renewed for a third season on CBS? The television vulture is watching all the latest TV cancellation and renewal news, so this page is the place to track the status of SEAL Team, season three. Bookmark it, or subscribe for the latest updates. Remember, the television vulture is watching your shows. Are you?

The second season of SEAL Team averaged a 0.76 rating in the 18-49 demographic and 5.03 million viewers. Compared to season one, that’s down by 25% and 25%, respectively. Find out how SEAL Team stacks up against the other CBS TV shows.

Will CBS cancel or renew SEAL Team for season three? The numbers haven’t been great (and have gotten worse) but the network needs newer dramas to eventually replace their older ones. I suspect the show will be cancelled but this one could go either way. I’ll update this page with breaking developments. Subscribe for free updates on any SEAL Team cancellation or renewal news.

5/9/19 update: CBS has renewed SEAL Team for a third season.

What do you think? Are you glad that the SEAL Team TV show has been renewed for a third season? How would you feel if CBS had cancelled this TV show, instead?

I have been an avid watcher of Seal Team and also wish they had more stories on with a bite in it and can hold your interest. I also hope they get more viewers and I look forward to it and always be on edge that they’re going to take off another good TV show.

I am very upset that Seal Team has not been on in the last 70 days. I also get mad when they show some other program in its place. It was my favorite show. If it has been cancelled let us know and don’t hide the fact it hasn’t been on.

Yes!!!! I’m so glad Seal Team will be back! I can’t wait love ❤️ love this show and characters in it!!!!
Thanks for renewing the show!!! Yeah

I believe Seal Team is one of the best shows on CBS I was very hesitant to start watching it as CBS has taken off other shows in the past. We love this show, if Seal Team is taken off we wouldn’t watch CBS.

I want Seal Team back it and Ncis .All of the NCIS show those are my all time favorite shows.