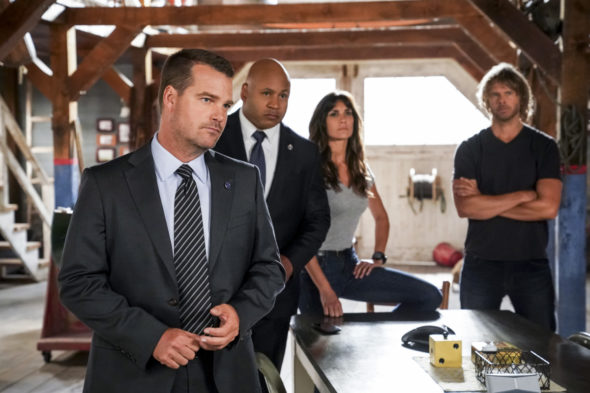 What’s next for Callan, Hanna and the team? Is the NCIS: Los Angeles TV show cancelled or renewed for an 11th season on CBS? Telly the television vulture is watching all TV cancellation and renewal news, so this page the place to track the status of NCIS: Los Angeles, season 11. Bookmark it, or subscribe for the latest updates. Remember, the television vulture is watching your shows. Are you?

Will CBS cancel or renew NCIS: Los Angeles for season 11? The drama dropped off pretty sharply last year, so the network may be thinking of winding it down. The ratings have remained pretty consistent though so I believe it will be renewed. For now, I’ll keep an eye on the Nielsens and update this page with breaking developments. Subscribe for free updates on any NCIS: LA cancellation or renewal news.

What do you think? Are you glad that CBS has renewed its NCIS: Los Angeles TV show for an 11th season? How many more seasons should this TV series run?

I will miss Hawaii 50 very much. It’s a great show . Why is it not coming back?

I suspect many of us do not like what Nia Long adds to the show’s chemistry.
Her role is to be brash, bossy, disrespectful, confrontational and annoying.

If you keep up this “days our lives” b.s., it should end

I love NCIS LA. I would be so disappointed if the show was cancelled . All the teams on the NCIS series are perfectly matched, which makes it exciting to watch all three…NCIS, New Orleans and L A!

It is the best show

NCIS LA is one of my favorite shows the cast is so good together. You have had a few people on that have fit in good and they have left I worry you are going to just decide you are finished with the show and ket all of us down.

I really enjoy the show, but I do think there needs to be a change in the background music.
Thank you

NCIS LA is my favorite of the NCIS franchise and unfortunately has been relegated to after football Sunday nights. It makes no sense and will have trouble finding the audience it deserves until they either pair it with Bull on Monday nights or just do the smart thing and run all three the same Tuesday night. Whatever, I am moving to internet TV quickly anyway and LA is the only NCIS I watch now on CBS All Access. Thank you for renewing it. It definitely IS the best and smartest with the best ensemble cast and stories of the three… Read more »

Love NCIS-LA and hope you will not sabotage. CBS by cancelling this show. It is creative, intelligent and one of the few reasons we still bother with Sunday night TV. Just wish that you could have kept Hodaki. She was a very good addition…she added a lot to the show. Please keep this show going…it is so revelant, and entertaining.

I love the show and watch every episode that comes on on Fridays and Sundays. I am glad that CBS picked it up again for another season or two or three or more.

Really enjoy this show. I even record it when it is on all day sunday. Looking forward for more new episodes

I love this show and NEVER miss an episode. Thank you to all invloved!! The actors all have a great repor!!