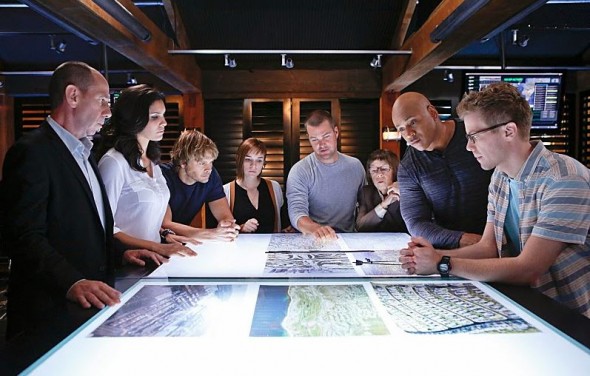 Some were worried that NCIS: Los Angeles being moved to Monday nights, away from the NCIS mothership, would lead to the show’s cancellation. Well, the ratings have dropped quite a lot but the series will return for a seventh season.

Airing on Monday nights, the numbers for NCIS: Los Angeles have indeed come way down in season six. It’s averaged a 1.62 rating in the 18-49 demographic with 9.32 million. That’s a decline of 34% in the demo and a drop of 37% in viewership.

While that’s not good news for the show’s future, the series is still CBS’ fifth highest-rated drama series of the season. Those ratings are apparently still good enough to secure a renewal for the 2015-16 season.

What do you think? Do you like the NCIS: Los Angeles TV show? Have you been watching on Monday nights?

Bring it on. The more the better. Gotta see the wedding.

Please keep NClS Los Angeles on air. We always watch it. It is one of our favorite programs.

I think it’s a great show. I hope the numbers get better. I would hate to see it go. I think there are plenty more stories that can be told.

Renew for another season CBS this show is one of the great shows that go along with NCIS NCIS New Orleans and NCIS Los Angeles so CBS with the rating they have need to renew on all three of them.

I watch NCIS Los Angeles, every night that it’s on. I have liked it so much that I watch the reruns . I believe that NCIS Los Angeles,NCIS and NCIS New Orleans are some of the best shows on TV. I am a retired law-enforcement officer and I Believe that the shows, need to be shown. Because they stand for good versus evil, which there is a lot of in this day and age.please don’t take this off the air, it’s not their fault that you moved them to Monday night football nite.

I do not like the fact NCIS Los Angles was moved to monday night but I can live with that.
What bugs me is when I’m set to watch the show and it does not come on like last night 26 Octbober 2015.