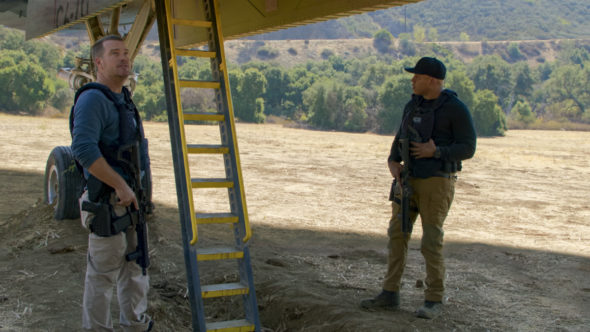 What’s next for these special agents? Has the NCIS: Los Angeles TV show been cancelled or renewed for a 13th season on CBS? The television vulture is watching all the latest cancellation and renewal news, so this page is the place to track the status of NCIS: Los Angeles, season 13. Bookmark it, or subscribe for the latest updates. Remember, the television vulture is watching your shows. Are you?

The 12th season of NCIS: Los Angeles averaged a 0.60 rating in the 18-49 demographic and 5.66 million viewers. Compared to season 11, that’s down by 12% in the demo and down by 11% in viewership. Find out how NCIS: Los Angeles stacks up against other CBS TV shows.

Will CBS cancel or renew NCIS: Los Angeles for season 13? These days, the network is holding onto successful and semi-successful TV shows for a lot longer than they used to. It’s in part because it’s become really tough to establish new shows that can perform as good as well-established ones. As long as the leads want to continue making the show and it makes sense financially for the network and CBS Studios, I think it will be renewed. I’ll update this page with breaking developments. Subscribe for free alerts on NCIS: Los Angeles cancellation or renewal news.

What do you think? Are you glad that the NCIS: Los Angeles TV show has been renewed for a 13th season? How would you feel if CBS had cancelled this TV series, instead?

Glad back on air one of the favorite drama, Mark Harmon NCIS both in a row.

Great beginning of the season 13th❤

NCIS is my favorite show, all the actors are what I wish people were like when faced with problems or just life in general.

Love NCIS La, please renew for season 13.. I am addicted to the show…love kensi and Deeks, Sam and Callen, Nell and Eric..miss hetty but understand..NCIS la, has consistently keep all their stars, unlike NCIS , which the only original is mark harmon and sean Murray..where NCIS la, has everyone ..please renew

I love this show so I would be gutted if this got cancelled.please do not cancel, i want to see callen have a happy ending and see densi have babies, and arkady cracks me up always. The bromance between callen and Sam is always worth watching. I want to see more series.