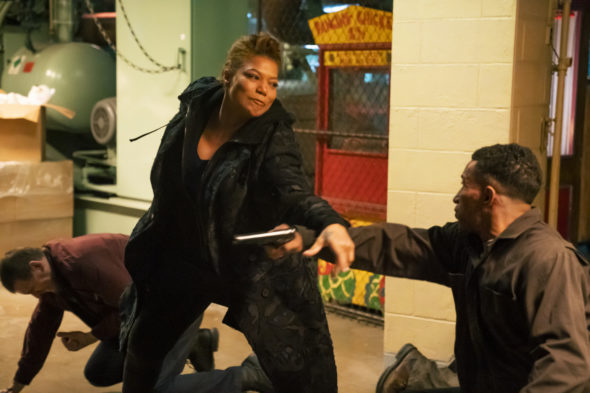 How long can Robyn keep her identity a secret? Has The Equalizer TV show been cancelled or renewed for a second season on CBS? The television vulture is watching all the latest cancellation and renewal news, so this page is the place to track the status of The Equalizer, season two. Bookmark it, or subscribe for the latest updates. Remember, the television vulture is watching your shows. Are you?

Airing on the CBS television network, The Equalizer TV show stars Queen Latifah, Chris Noth, Lorraine Toussaint, Tory Kittles, Liza Lapira, Adam Goldberg, and Laya DeLeon Hayes. The story follows Robyn McCall (Latifa), an enigmatic woman with a mysterious background. She uses her extensive skills as a former CIA operative to help those with nowhere else to turn. To most, Robyn appears to be just an average single mom who is quietly raising her daughter (Hayes) and living with her aunt (Toussaint). However, to a trusted few, Robyn is The Equalizer, an anonymous guardian angel and defender of the downtrodden, who’s also dogged in her pursuit of personal redemption. Joining Robyn as champions of justice her former CIA handler (Noth), an edgy bar owner and past colleague (Lapira), and a paranoid and brilliant white-hat hacker (Goldberg). As Robyn aids the oppressed and exploited, her work garners the attention of a shrewd NYPD Detective (Kittles) who doggedly seeks to uncover the identity of the vigilante known as “The Equalizer”.

The first season of The Equalizer averaged a 1.18 rating in the 18-49 demographic and 8.79 million viewers. Find out how The Equalizer stacks up against other CBS TV shows.

Will CBS cancel or renew The Equalizer for season two? The series got off to a great start when it followed Super Bowl LV. The numbers will drop for later episodes but it fits in with the network’s other programming and has a star (Latifa) in the title role. I’m confident that The Equalizer will be renewed for a second year. I’ll update this page with breaking developments. Subscribe for free alerts on The Equalizer cancellation or renewal news.

3/10/21 update: The Equalizer has been renewed for a second season on CBS.

What do you think? Are you glad that The Equalizer TV show has been renewed for a second season? How would you feel if CBS had cancelled this TV series, instead?

I didn’t discover the Equalizer show until the first season was almost over. Now my wife and I make sure we record every episode so we never miss one.
Previously we were not big fans of Queen Latifah, but that is probably because I am not a big fan of sit-coms and that is all I thought she did.
I hope the show will continue for several seasons. The writers are excellent as are the actors and director.

My husband and I love The Queen and the cast of The Equalizer. Keep it coming.

I would be furious because I believe this is a very good show and there is so many shows on now that just annoy the heck out of me because they are FAR from reality shows but they claim to be reality shows.

I have enjoyed this show and hope it goes on for many seasons!

I love this show, and am so glad that it is being renewed for another season. I have two (2) friends that watch it as well and when it’s over, we’ll call each other and sometimes talk over the phone while watching it from our homes (social distancing) – but love it!

Please understand that you can’t asked for a more action pak movie. I REALLY ENJOY IT ,WHICH IS SOMETHING DIFFERENT ALMOST LIKE CHARLES BRONSON,LIKE REALLY PROTECTING THE NEIGHBORHOOD AND THE STREETS FROM THE BAD GUYS.
THANK YOU !

I’m glad they did not cancel this show. I liked the original version as well.

I really like the show, it’s entertaining and different compare to the same stuff on TV. Latifah really plays her part really well. I can’t wait till season 2 starts.

I love this show and I’m not even a Queen Latifa fan. I hope it continues.

I see some of the people here seem to be upset that there is finally a show that shows a Beautiful Black women who is not on welfare, a hooker, or drug addict. It’s better then most of the crap on TV now.