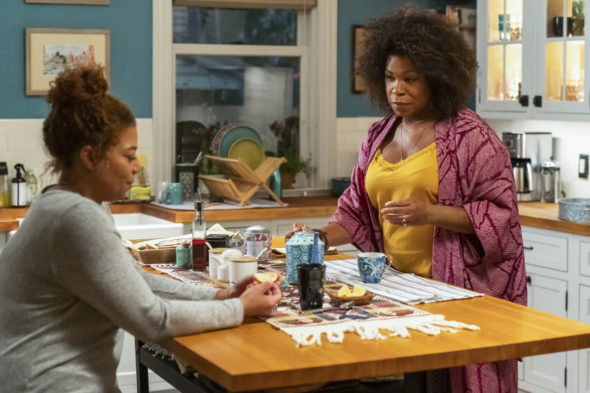 Can Robyn stay one step ahead of the law while helping those in need in the first season of The Equalizer TV show on CBS? As we all know, the Nielsen ratings typically play a big role in determining whether a TV show like The Equalizer is cancelled or renewed for season two. Unfortunately, most of us do not live in Nielsen households. Because many viewers feel frustration when their viewing habits and opinions aren’t considered, we invite you to rate all of the first season episodes of The Equalizer here.  *Status Update Below.

A CBS action crime series, The Equalizer TV show stars Queen Latifah, Chris Noth, Lorraine Toussaint, Tory Kittles, Liza Lapira, Adam Goldberg, and Laya DeLeon Hayes. The story follows Robyn McCall (Latifa), an enigmatic woman with a mysterious background. She uses her extensive skills as a former CIA operative to help those with nowhere else to turn. To most, Robyn appears to be just an average single mom who is quietly raising her daughter (Hayes) and living with her aunt (Toussaint). However, to a trusted few, Robyn is The Equalizer, an anonymous guardian angel and defender of the downtrodden, who’s also dogged in her pursuit of personal redemption. Joining Robyn as champions of justice her former CIA handler (Noth), an edgy bar owner and past colleague (Lapira), and a paranoid and brilliant white-hat hacker (Goldberg). As Robyn aids the oppressed and exploited, her work garners the attention of a shrewd NYPD Detective (Kittles) who doggedly seeks to uncover the identity of the vigilante known as “The Equalizer”.

What do you think? Which season one episodes of The Equalizer TV series do you rate as wonderful, terrible, or somewhere between? Do you think that The Equalizer should be cancelled or renewed for a second season on CBS? Don’t forget to vote, and share your thoughts, below.

*3/10/21 update: The Equalizer has been renewed for a second season on CBS.

I really love the show. I wasn’t going to watch it but when I saw the first episode I got hooked and queen Latifah is perfect for the show and aunt vi . She always had her back. Like from the movie taxi she did to this I’m happy she got this role. Queen Latifah kicks ass. I hope to see alot more seasons to come.

Love this show! Everyone has great chemistry.

I like the show and think that the issues the show covers are happening in the real world. I like shows like this and thinks that it should be renewed for another season. I watch it every week.

I for one like the series. Queen Latifah portrays her roll well. She is guitsy and caring. I like the idea that she is out there protecting the little guy.

I disagree with bare. The Equalizer is the best show that has come along in decades!

This could have been a great show. I like Queen Latifah, but she’s not right for this part. The main role should have been a guy like in the movie. But if it had to be a woman, someone like Halle Berry, who can do action roles would have worked. Also, it’s so political, it’s sickening.

Most CBS shows always have political bs in them. I think NCIS and The Equalizer probably have the least. I can’t stomach FBI.

Love this show. The team chemistry is awesome. Please renew.

Love this Show! Queen Latifa, Aunt Viv, all the equalizer team, detective. The writers are amazing!!

I watch very little TV. Happened to see the Equalizer after the Super Bowl by accident. Immediately got hooked. I never miss it whether it’s Sunday night or on Demand. ALWAYS watch it at least twice. I love the story lines, I love that it’s fast moving and doesn’t drag the show like the other police shows do. It adds humor as well as a mixed story line each week. And it also serves as a lesson for both parents and children as to the environment of raising today’s kids. The child’s side, the parents side and the similarities in… Read more »

Debby, you are so right and my wife and I never miss it on Sunday evenings either just because of what you said. Queen Latifa is wonderful in the role. We just hope it continues to be renewed year after year!

I love this new show!! Such a great cast and really good stories about JUSTICE!! Queen Latifah is so so good!!

I love the Equilizer and Queen Latifa
She does a great job.