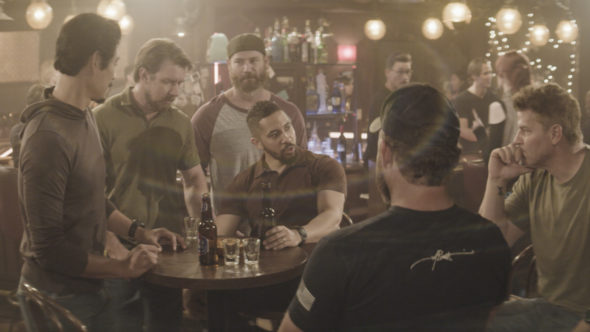 Will everyone return from the missions in the fourth season of the SEAL Team TV show on CBS? As we all know, the Nielsen ratings typically play a big role in determining whether a TV show like SEAL Team is cancelled or renewed for season five. Unfortunately, most of us do not live in Nielsen households. Because many viewers feel frustrated when their viewing habits and opinions aren’t considered, we invite you to rate all of the fourth season episodes of SEAL Team here.  *Status Update Below.

A CBS military drama, SEAL Team stars David Boreanaz, Max Thieriot, Neil Brown Jr., AJ Buckley, and Toni Trucks, with Justin Melnick, Tyler Grey, Scott Foxx, and Judd Lormand in recurring roles. The series centers on an exclusive Navy SEAL unit as they train for, plan, and risk their very lives to carry out perilous missions for the sake and honor of their country. Fierce and focused Jason Hayes (Boreanaz) leads the Tier One team. Despite the hardship it causes them and their families, this SEAL team is ready, willing, and able to embark upon secret missions at the drop of a hat. Team members include Jason’s trusted confidant, Ray Perry (Brown Jr.); loyal yet self-destructive Sonny Quinn (Buckley); and young Clay Spenser (Thieriot), a multilingual and second-generation SEAL. Others who are vital to the team’s success are no-nonsense Ensign Lisa Davis (Trucks) and troop commander Lt. Cdr. Eric Blackburn (Lormand).

What do you think? Which season four episodes of the SEAL Team TV series do you rate as wonderful, terrible, or somewhere between? Do you think that SEAL Team should be cancelled or renewed for a fifth season on CBS? Don’t forget to vote, and share your thoughts, below.

Look forward new season on paramount plus and cbs too. Enjoy it and love it this show military drama. Such a great story.

I can’t believe that CBS did not renew SEAL TEAM where is your patriotism? This is one of the best shows on tv. I wait all week to see the next episode. You kept some really dumb stuff. It just shows what the mentality of society is these days in saving stupid crap and canceling shows like this. CBS SUCKS. Wish another network on regular tv would jump in and pick it up.

Renewing Seal Team was the right move for CBS. However, we will be able to watch it on Paramount +.

When you live in the “COUNTRY and only access the INTERNET by Satellite, streaming becomes out of the question. We pay 100.00 dollars for 20 GB of data per month. People on a fixed income cannot afford streaming.

When are we going to see Pepper and her handler again?

Fantastic episode last night, actually in tears several times. Overjoyed with renewal. CBS just start with it on Paramount+ due to sports messing with shows on Sunday night. Fantastic season 4.

I think it is despicable that this show was moved to Paramount Plus. The networks constantly cancel shows that are very good — shows that many like — and then in their unsatisfied avarice for money, they do this. My cable bill is high enough, and all cable providers are monopolistic in power, money, and exorbitant pricing. I would not pay 1 extra cent to watch this program on Paramount Plus. Not To Viewers: CBS is also booting the show “Evil” is headed there — another big punch in the face. Also, the show “Clarice” might be headed there too!!!!!!!!!!!… Read more »

Someone here said that SEAL Team, if renewed, start out Season 5 on CBS, and then go to Paramount +, a premium service. If that happens, I guess I’ll be waiting for the whole fifth season to come out on DVD, so I can check it out for free from the library.

The network is moving Seal Team and Evil to Paramount Plus. I don’t believe I have that channel; perhaps it’s a premium one, but in no way, am I paying more to watch TV. These networks and providers are disgustingly greedy. Also, Clarice might be going to Paramount Plus. I guess if the trend continues they’ll move Big Sky there too.