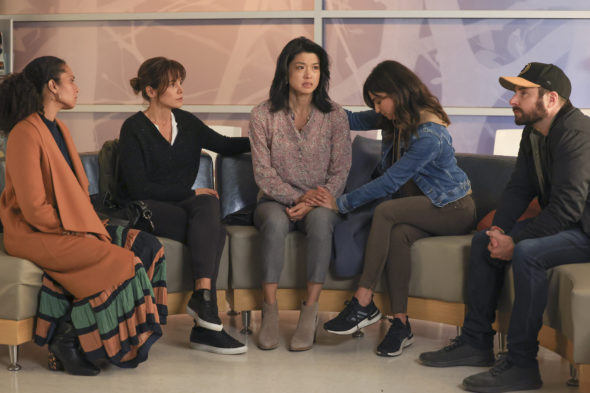 An ABC family drama series, A Million Little Things stars David Giuntoli, Romany Malco, Allison Miller, Christina Moses, Grace Park, James Roday Rodriguez, Stephanie Szostak, Floriana Lima, Tristan Byon, Lizzy Greene, and Chance Hurstfield. Set in Boston, this series revolves around a tight-knit group of friends who are each feeling stuck in different aspects of their lives. Their worlds are rocked when one of them unexpectedly takes his own life and this horrific event serves as a wake-up call to the others. In season three, the group of friends once again lean on each other in ways that are both moving and aspirational. Friendship isn’t a big thing. It’s a million little things.

*5/14/21 update: A Million Little Things has been renewed for a fourth season on ABC.

Please keep this show on the air !!!
It helps all of us cope with REAL Life….

Sorry this show was renewed after the last few episodes.

This is my favorite show. Thank you for renewing the show. Love the cast. Never a dull show. Always something happening.

Please do not cancel this show. I look forward every week to watch it. Great show, on my very favorite list.

Do not cancel we need a season 4 please! Love this show and all of the actors. This is good television and can’t wait to see season 4!

Cancel and put the poor thing out of it’s misery. The present crop of writers have gone way beyond too woke, the series has become unwatchable. Episode 12 of season 3 was the end for me, turned it off at the Floyd point, will never watch another episode because I can make better use of my somewhat limited time.

JUST DON’T WATCH. ITS THAT EASY!!

Do not cancel this show, it’s emotionally and sensitive the way, each different lives, intertwine in a truly friendship