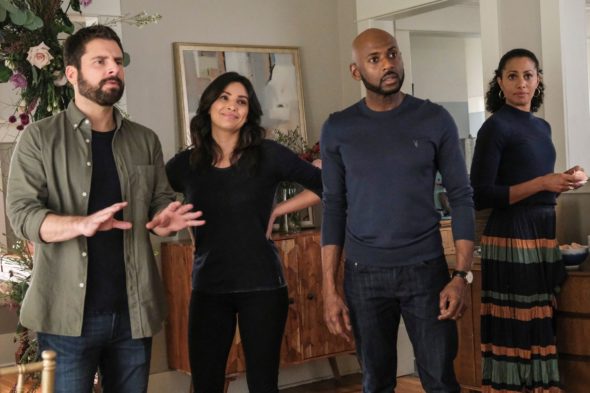 Life will continue for A Million Little Things. ABC just announced they’ve ordered a third season of the TV show for the 2020-21 season.

Set in Boston, the A Million Little Things drama series revolves around a tight-knit group of friends who are each feeling stuck in different aspects of their lives. Their worlds are rocked when one of them unexpectedly takes his own life and this horrific event serves as a wake-up call to the others.  The cast includes David Giuntoli, Ron Livingston, Romany Malco, Allison Miller, Christina Marie Moses, Christina Ochoa, Grace Park, James Roday, Stephanie Szostak, Lizzy Greene, Tristan Byon, and Chance Hurstfield.

Season two of A Million Little Things averaged a 0.71 rating in the 18-49 demo with 4.14 million viewers. That’s a 23% and 3% decrease from season one, respectively. Despite the slight ratings dip, the series remains one of ABC‘s top-rated dramatic TV shows for the 2019-20 season.

What do you think? Are you a fan of A Million Little Things on ABC? Are you excited for season three of this TV series?

I am thrilled that “A Million Things” is not going to be cancelled. It is one of my all time favorite programs. The only negative I find about it..is that the “seasons” are so short. Also, once in a while it is not on, even though it is a scheduled night. Then it was changed from Thursday to Wednesday. I find that it is confusing to know is it on…isn’t it on…..when is the next season starting…when is it ending. I feel with the lack of consistency, it is somewhat hard to follow. I think that if it were on… Read more »

I love “A Million Little Things”. Please, please don’t cancel the show. It is my absolutely my favorite. Keep the series coming. Thank you!

My husband loves the show and I got on board later. Please keep on shooting and keep it on the air.

Please do not cancel A Million Little Things. The stories of family problems, love triangles, relationships, family. We have way to many police, law, fire, murder mysteries. This program is just passion of all aspects.

YES! I’M A FAN. WHEN WILL THE NEXT EPISODE AIR?

so glad its back… looking forward to thursday night

SO GLAD IT IS BACK FOR ANOTHER SEASON I THOUGHT THEY CANCELLED THE SHOW I AM ON TV NOW AND SAW THIS THURSDAY PREMIERE YEAH!