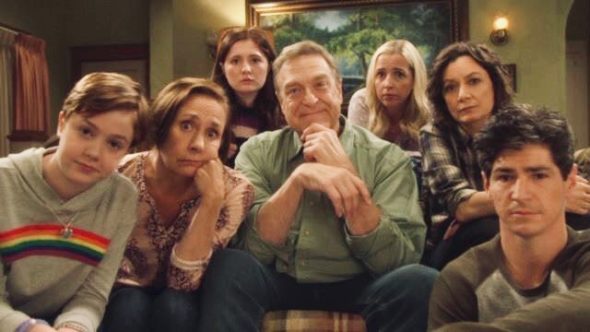 In its first year, The Conners was ABC’s highest-rated scripted series of the 2018-19 season. Part of that season average was due to a lot of people tuning in to the first episode to see how Roseanne Barr’s character had been written out. Though the ratings dropped after that, the network believed in The Conners series enough to renew it for a second season of 19 episodes (eight more installements than last season). Will it continue to perform well for the alphabet network? Will The Conners be cancelled or renewed for season three? Stay tuned.  *Status update below.

5/6 update: You can see the latest night’s ratings in context.

For comparisons: The first season of The Conners on ABC averaged a 1.56 rating in the 18-49 demographic and 7.46 million viewers.

What do you think? Do you like The Conners TV series on ABC? Should it be cancelled or renewed for a third season?

They should cancel this show. This should have never been aired after the firing of Roseanne. It was her show!!!! I won’t watch it and never will.

So much better without Rosanne. The writing and acting is first rate.

This isn’t even close to the rating juggernaut that ABC would have you believe it is. They purposely use things like “number one scripted comedy”, because it rules out the big ratings draw now- reality television (don’t get into the whole real/fake stuff, because parts may be semi-scripted). Also, so few comedies even exist as well, with most of them kind of having run their course- Modern Family. So, if this were really a huge ratings draw like ABC says, they wouldn’t have to get specific by saying it’s scripted, or a comedy, they’d say stuff like Roseanne did when… Read more »

Funny ABC now reports the ratings last year were 7 million watching but, several times last year, I checked Nielson ratings and it was 18 million a couple of times but, dropped after Rosannes comment. Kathy Lee can show a bloody president’s head on a platter and do comedy about it, but, Rosanne a Trump supporter, gets bounced. That show had potential to show how family members could express differing political opinions that reflected more than the liberal perspective and that was refreshing and reality. Example, when Dan hired someone not union and worked cheaper rather than his neighbor. May… Read more »

I have absolutely no idea what you are saying here. You are completely incoherent and all over the map. Also, it’s Kathy Griffin. Not Kathy Lee. Who, btw, was dropped by her agency and several paid gigs because of that bloody head picture. Most of the industry turned their back on her because of that. She also apologized for that at the time. Roseanne blamed everyone else (and drugs). Kathy Griffin rebuilt her brand and started playing to sold out shows again. Taking back her apology to that orange idiot.

Don’t enjoy this version, miss Roseanne and frustrated by the storylines. Disappointing

I think that they should bring back roseanne SO they could have better raitings. The show just isn’t the same and I’m quite disapointed what happened. Way to hold a grudge abc where’s your forgiveness roseanne apologized but for you that wasn’t enough and dont give me your excuse about we had trouble with her I’m sure she wasn’t the first actor you’ve had problems with. Mayne your the problem

I really think the LifeCoagh thing for Jackie should go away. It makes her more EXPERT, Opinionated and biased. That is not Jackie’s Character.. I think Dan and the Bartender (Katie Segal) should build their relationship and I think you need to focus more on the children. I am open to gay, lesbian, Transgendered people, but don’t push the issue. I also think that Darlene and David should get back together, Don’t recycle the plot, but there are more current issues. Bring Becky’s baby daddy back into the picture and try to focus on family values. The pot cookies were… Read more »

Here is why Roseanne is 100% correct-she said Sara Gilbert wanted to control the show and be the star. Gilbert is doing this. No one cares about her character. She was the arc for Roseanne. Her stupid love triangle that no one cares about and her lame attempts at being the matriarch is sickening. I tuned in for 10 minutes-to see the sofa. Unwatchable. Roseanne WILL be back on TV soon. I am sure she signed a deal that she couldn’t be on a show for a year. Hopefully she will be on cable and that will be the end… Read more »

Keep dreaming she won’t be. What do you know if people allowed to do what Rosanna did this network and all network would be full of these types of idiotic events. Networks wanna make money do you know when I said do themselves to self righteous people and they never had a right to terminate her. If the show dies it dies I’d rather die than the network compromise is it integrity just because somebody had a mouth off the issues that they had no business expressing in front of their fans to influence them. Doesn’t matter who the actor… Read more »

Epo You’re joking?? Right network what? Have u been living under a rock? Go on youtube a news woman told a African American man that looks like a monkey then all she had to do is cry and say she was So Very Sorry but you’re so right a little tweet is the worst deal all u have be is young and blond and u can do what ever u want that’s what u are saying? Right?. O sorry to be the one to tell u but no one on tv or make movies have integrity it’s all about the… Read more »

No I live in a real world, I’m not gonna sit here and insult like you did me. But instead I’m gonna explain that people watch what they want and are not influenced by other people who insult others. I like to show the way it is now maybe it’s not as flamboyant but then again it’s not as radical and political as it was before. There you have it

Yeah I understand this, people just don’t understand that somethings are just not coming back. No matter how much you want it Roseann is not coming back and she won’t be allowed back! You can negative comment all you want but that’s not gonna change the fact that what she did was completely utterly wrong. Anybody else then the President now would be totally isolated from the movie and TV world. So what makes different President doing this Trump? It’s open season on him come on people were much better race of people then with the Roseanna’s of the world… Read more »

Quite the drop from last year. I watched it, and it still doesn’t feel right. I probably won’t watch any more episodes this year, the writers seemed to have changed these characters, and I’m not a fan. Honestly, if this thing drops continually each week like it did last season, it’s probably going to be less than 1 share with under 3 million viewers (if not less than that). That’s substantially lower than Roseanne’s season 10 originally brought in at the end.

Sounds like a lot of the audience, because going from 10 million to just over half that is quite the drop.

The connors need to be canceled. Today. Trying to continue without Roseanne is not working. Not funny. Not worth my time. All your doing is going through the motions. No heart anymore.

I like The Connors… didn’t watch it with Roseanne, never liked her. The thing I don’t like here is that they are making that little boy gay. Guess they want to be all things to all people keeping up with the time. I might just stop watching for that reason.

You are reading the numbers. Yes the show lost half their audience but The Conners are still the among the highest watched show of the night. They are on par with NCIS (which only beats it when you include the 50+ people) and the only TWO SHOWS that beat it on Tuesday are The Voice and This is Us neither of which are comedies.

It’s dropping every week, while the others are holding more constant showing that viewers are leaving.

And the latest ratings were…..a .6 on March 31 for “ABC’s biggest hit.” As usual, ABC brought up the rear, even amid other reruns airing. These storylines are so lame, even teasing a hookup between Dan and Louise (Louise to Dan: “Do you want me to stay?” Stay IN LANFORD, it turned out lol) didn’t provide a bounce. And the average? Are they kidding? Other networks would be sending flowers to a network airing such an underperforming series. I’ve given it a chance, too. “Jackie” has become a ridiculous caricature, storylines are unmemorable, and and a dark, dingy, dead set… Read more »