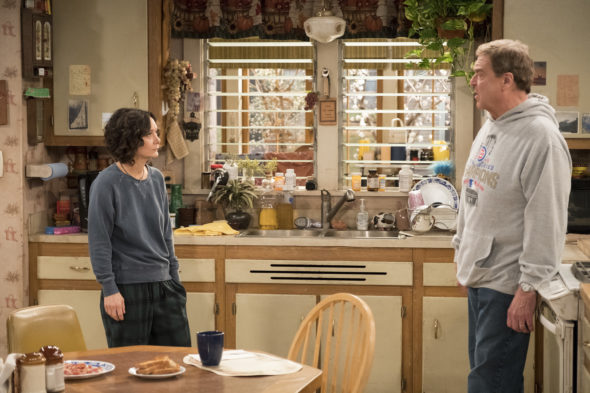 The Conner clan will return this fall but it will be without their matriarch. ABC has ordered a spin-off of the Roseanne TV show which was abruptly cancelled earlier this month by the network following a controversial tweet by star Roseanne Barr. The Conners (working title) will air in Roseanne’s former timeslot, Tuesdays at 8 PM.

ABC had stipulated that they would only be interested in a spin-off if Barr had no creative or financial involvement. It seems that producers were able to work out a deal with Barr so that the show could move forward. It’s unclear if Barr’s character will be killed off or if her absence will be explained in some other way.

Here’s the press release for the series order:

“The Conners” (working title), a spin-off of the groundbreaking family comedy “Roseanne,” has been greenlit to series with an order of 10 episodes for fall 2018. After a sudden turn of events, the Conners are forced to face the daily struggles of life in Lanford in a way they never have before. This iconic family – Dan, Jackie, Darlene, Becky and D.J. – grapples with parenthood, dating, an unexpected pregnancy, financial pressures, aging and in-laws in working-class America. Through it all, the fights, the coupon cutting, the hand-me-downs, the breakdowns – with love, humor and perseverance, the family prevails.

Roseanne Barr will have no financial or creative involvement in the new series.

“The Conners’ stories demonstrate that families can always find common ground through conversation, laughter and love. The spin-off will continue to portray contemporary issues that are as relevant today as they were 30 years ago,” ABC shared in a statement.

“We have received a tremendous amount of support from fans of our show, and it’s clear that these characters not only have a place in our hearts, but in the hearts and homes of our audience. We all came back last season because we wanted to tell stories about the challenges facing a working-class family today. We are so happy to have the opportunity to return with the cast and crew to continue to share those stories through love and laughter.”

In our recent poll, 37% of respondents said that they would watch a Conners spin-off without Barr. Meanwhile, 48% said they would not watch and 15% indicated they weren’t sure.

What do you think? Do you plan to check out The Conners TV show on ABC?

My household will never watch the Conners with out Roseann. We were so excited for the Roseann reboot. Now the fun is gone!

Bring back Roseanne! All the characters are great but they’re not the Conners without her. Destroying a great show and her career over a “tweet” is beyond ridiculous. She’s always been outspoken. That’s who she is and always has been. Why should she change because someone might get their feelers hurt. We love Roseanne!!

Will not watch. Did watch because of Roseanne; will not because she is gone. Don’t like the way that whole mess was handled. Do we not believe in forgiveness anymore?

Why do they keep trying to breathe life into old tv shows? Let them die in peace. No, I won’t be watching the Connors, I would not have watched Roseanne either, their time is OVER. Are all the writers dead? How about something new? Why are we stuck with the Connors, Murphy Brown, Magnum, etc. good grief! STOP! Stop trying to breathe life into old, dead series that were funny 20 years ago, not funny now.

They are going tp find out the hard way that without Rosanne their show is nothing but a third rate imitation. They dont know the viewers or they dont care. Watch as this show crashes and burns.

No I will not be watching the Conners and I watch everything and anything. Without Rosanne Barr there is no show. She is the show and loved every episode. Others make derogatory remarks and go on with their shows why was she singled out? ABC lost a winner.

The show’s return was a total disappointment and I wasn’t going to watch further, anyway.
I wish the new show luck, but I won’t be watching.

However they decide to write RB out of the series is fine with me! They could do a divorce episode if they don’t want to kill her off. Bring a nicer female in as a love interest for John Goodman. I’m on the ‘undecided’ fence, but I’ll watch a few episodes and go from there.

Roseanne couldn’t act her way outta a paper bag so no big loss there. John Goodman and the grandkids this last season were great so I’ll take more of that action!

I will watch. Sara and Laurie and John were the true talents,always, not Roseanne

Agree. Didn’t watch because of Roseanne, but definitely will watch now.

NO WAY, I CAN NOT STAND , NOTHING RELATED TO HER , NOT INTERESTED !!!!

I’ll watch!! Love the cast so hoping it is a big hit.

If I were in charge I would have the actress who plays Becky in the spotlight. She stole every scene and was very likable, lovable, funny and extremely enjoyable to watch. Metcalf of course is very talented as well and the rest of the cast is pretty lame. I am not going to watch any show that bashes our President and misrepresents him or his supporters. Thats why I quit watching the main stream media TV to begin with. That being said I will be open minded enough to watch a a few episodes before making a decision.

Well I just can’t imagine the show without Roseanne, however we will watch. In the original series Darlene and DJ were hilarious, Becky was annoying, Dan was great and Jackie with her quirks was hilarious too. Loosing Roseanne what a shame there are big shoes to fill.
Jackie needs a new sidekick and not Crystal (she was boring and dry as a bone). Someone like Bonnie would be good.

Roseanne had it coming. Can’t stand her anymore. The show will do well without her constant whining.

Worth a try and whilst a risk, I will certainly give it a fair airing.

No. Roseanne was the show!

Disagree, when it came back didn’t watch it because of her, but definitely will now. Love the rest of the cast.

I agree! Not watching without the star. I’ll tell you what, I’ll watch The Conner’s without Roseanne right after the network kicks Joy Behar off of her show.