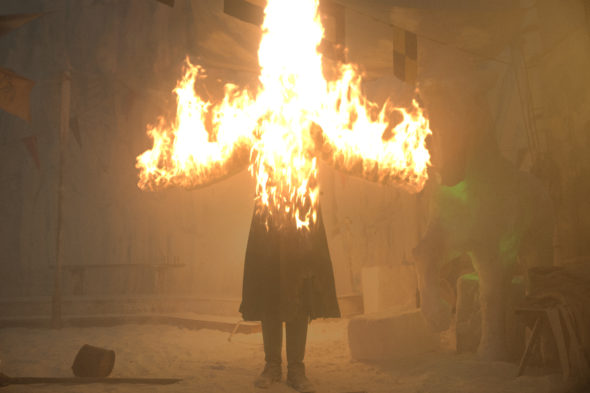 Don’t sleep easy just yet. AMC has renewed The Terror TV show for a second season, with a new creative team. Season two of the horror anthology series, which will premiere TBD in 2019, involves a specter in a Japanese-American community and internment camps.

Alexander Woo and Max Borenstein are the co-creators and executive producers for the second season of The Terror on AMC. Woo is also taking the showrunner reins. The series hails from AMC Studios, Ridley Scott’s Scott Free production company, Emjag Productions, and Entertainment 360.

The Terror: A Look at the Ratings

The first season of The Terror averaged a 0.36 rating in the 18-49 demographic and 1.22 million viewers. Learn how The Terror stacks up against other AMC TV shows.

Learn more about The Terror season two renewal from this AMC press release.

“The Terror” Is Executive Produced By Ridley Scott and is an AMC Studios Production, Produced by Scott Free, Emjag Productions and Entertainment 360

NEW YORK, NY, June 22, 2018 – AMC today announced that it has renewed its popular and critically acclaimed anthology series, “The Terror” for a second season. The next iteration of “The Terror” anthology will be set during World War II and center on an uncanny specter that menaces a Japanese-American community from its home in Southern California to the internment camps to the war in the Pacific. Season two of “The Terror” anthology is co-created and executive produced by Alexander Woo (“True Blood”) and Max Borenstein (“Kong: Skull Island,” “Godzilla”). Woo is also set to serve as showrunner. The next season of “The Terror” anthology is expected to air on AMC in 2019 with 10 episodes. The series is distributed internationally by AMC Studios and premieres across AMC Global markets as well as in certain Amazon Prime Video territories. “The Terror” season two is executive produced by Ridley Scott and is an AMC Studios production, produced by Scott Free, Emjag Productions and Entertainment 360.

Season one of “The Terror” was the number two new drama on cable for the current television season and a top 10 drama on ad-supported cable overall, well-received by critics and audiences alike. Vulture said “The Terror” was “a horrifying 19th century nightmare.” The Daily Beast called it “Stunning. TV’s most terrifying new show.” TV Insider said it was “literate and philosophical, yet shocking and terrifically scary.”

“’The Terror’ has given us the opportunity to take a unique approach to the anthology format. We loved the concept of beginning with an actual historical event and overlaying it with a fictional horror element, and we are immensely proud of this show’s combination of cinematic scope and intimate character work. We are thrilled to announce a second season and dramatize one of the most chilling and important events of the 20th Century, guided by the vision of the gifted Alexander Woo and Max Borenstein,” said David Madden, president of original programming for AMC, SundanceTV and AMC Studios. “Our deep appreciation goes to the persistently creative and passionate showrunning team of David Kajganich and Soo Hugh, the incomparable Ridley Scott and the rest of the producing team, and the outstanding cast led by Jared Harris for launching this concept and leaving us on the precipice of terrifying new adventures as we continue with the next chapter of ‘The Terror.’”

“I’m deeply honored to be telling a story set in this extraordinary period,” said Woo. “We hope to convey the abject terror of the historical experience in a way that feels modern and relevant to the present moment. And the prospect of doing so with a majority Asian and Asian-American cast is both thrilling and humbling.”

“As a history-buff and genre geek (not to mention a conscious American today), it’s clear that truth is always scarier than fiction,” said Borenstein. “This season of ‘The Terror’ uses as its setting one of the darkest, most horrific moments in our nation’s history. The Japanese-American internment is a blemish on the nation’s conscience — and one with dire resonance to current events. I’m thrilled that AMC is giving us the chance to use that darkness as the inspiration for what I hope will be a trenchant, terrifying season of TV.”

Season two of “The Terror” anthology series is co-created and executive produced by Alexander Woo and Max Borenstein, from an idea by Borenstein. Woo, who is currently in an overall development deal with AMC, serves as showrunner. The series is an AMC Studios production produced by Scott Free, Emjag Productions and Entertainment 360. “The Terror” is also executive produced by Ridley Scott, Dan Simmons, David W. Zucker, Alexandra Milchan, Scott Lambert and Guymon Casady.

The first season of “The Terror” was inspired by a true story about the Royal Navy’s perilous voyage in 1847 while attempting to discover the Northwest Passage. Frozen, isolated and stuck at the end of the earth, “The Terror” season one highlighted all that can go wrong when a group of men, desperate to survive, struggle not only with the elements but with each other.

What do you think? Did you enjoy the first season of The Terror? Do you plan to watch the second season on AMC?

Yes, definitely will watch. Loved the first season. Just a great show all around.

Im so happy to hear this!!i was looking forward to see if there will be a second season!!yey

So happy that the terror has been renewed.The first season was my favorite show of 2018

Happy Friday on this news! This was such a GREAT show! So unique and intelligent vs the garbage being shoved down our throats by networks such as TNT. I just wish AMC would really kick around doing Dan Simmons Drood, which is just as dark and downright creepy @$$ creepy as The Terror.