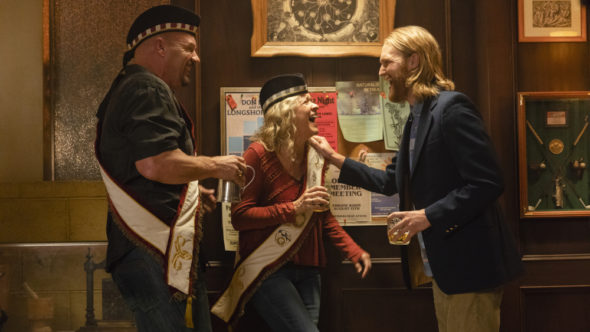 Some of your favorite TV shows are back in action. Recently, AMC, BBC America, and IFC  announced production has begun on new seasons of The Terror, Lodge 49, Doctor Who, and Year of the Rabbit.

Start of production dates and series information are below (by network):

DISPATCHES FROM ELSEWHERE – The recently-greenlit anthology series created by and starring Jason Segel begins production in Philadelphia, PA in July 2019. Dispatches From Elsewhere is about a group of ordinary people who stumble onto a puzzle hiding just behind the veil of everyday life. They will come to find that the mystery winds far deeper than they ever imagined. Segel will executive produce with Scott Rudin, Eli Bush and Garrett Basch. The hour-long series will include viewer engagement elements across multiple media platforms.

TOP GEAR – Top Gear Season 27, which began production on January 11 in the UK, will see entertainment host and comedian Paddy McGuinness and TV presenter and cricketing legend Freddie Flintoff join journalist and racing-driver Chris Harris as hosts of the world’s biggest car show. The new season promises to be one of television’s most explosive combinations of entertainment firepower and “petrolhead” fumes. Clare Pizey is executive producer. Top Gear is a BBC Studios production.

DOCTOR WHO – Doctor Who began production on its second season with the new cast on January 21 in Cardiff. Following their acclaimed first season, Jodie Whittaker reprises her role as the Doctor and she will once again be joined by Bradley Walsh (Graham), Mandip Gill (Yasmin) and Tosin Cole (Ryan). The 55-year-old iconic action adventure series travels through all of space and time, telling stories packed with humor, emotion and the occasional alien. Chris Chibnall is showrunner. Doctor Who is a BBC AMERICA co-production with BBC Studios.

SHERMAN’S SHOWCASE – Sherman’s Showcase began production on its first season on January 17 in Los Angeles, CA. Sherman’s Showcase is a new musical variety sketch comedy show created, written and executive produced by Diallo Riddle (Marlon, Rise) and Bashir Salahuddin (GLOW, Snatched) and produced by Frank Scherma and Jim Bouvet of RadicalMedia (Stan Against Evil). Drawing inspiration from the likes of American Bandstand, Soul Train and Solid Gold each episode of Sherman’s Showcase is hosted by Sherman McDaniel (Salahuddin) as he takes viewers through time via music and comedy drawn from the 40-year library of a legendary (but fictional) musical variety show. Whether it’s a questionably attired funk super group in the 1970s, an up-and-coming MC in the 1980s or an R&B diva from the 1990s, Sherman’s Showcase has it all: music, comedy, games and dancing, with an exuberant host who’s been with the show throughout its run. John Legend, Mike Jackson and Ty Stiklorius serve as executive producers through their Get Lifted Film Co. (Underground, Jesus Christ Superstar).”

What do you think? Are you a fan of The Terror, Lodge 49, and/or Doctor Who? Which new series will you check out?