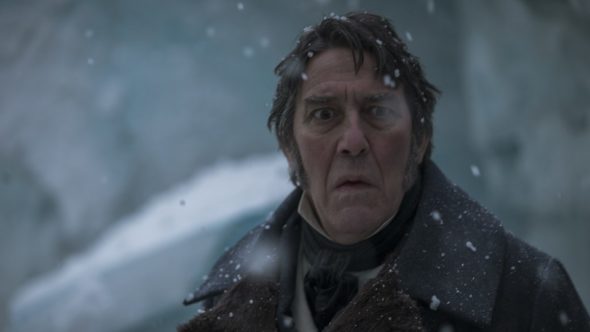 The Terror just finished its first season, but will there be a second? Recently, co-showrunner Soo Hugh spoke with TVGuide about the future of the AMC TV show.

In the interview, Hugh revealed that if AMC renews The Terror, season two will feature a different story:

When AMC greenlit the show now almost three years ago, they greenlit it as an anthology show. Meaning Season 1 would be the story of the Franklin Expedition, and subsequent seasons would take on a new narrative that carried the DNA that we established in Season 2.”

AMC has yet to announced a season two renewal for The Terror.

What do you think? Have you seen The Terror? Would you watch a second season if the story was different?

I would most definitely watch and enjoy another season. Great story line and acting. I keep checking daily to see if continued.

Yes, but Scott Ridley has got to be involved. The Terror was fabulous as was Taboo. What entertainment!

This was a freaking awesome show! Would love to see AMC do Simmons’ Drood which was CREEPY!

Liked it at the beginning of the season, but it kept dragging on, and on. Definitely needed less episodes, and the human polar bear monster came out of left field. I think that turned some people off, as it became about a monster hunting them, instead of just a survival-mutiny drama.

I guess as an anthology show it could work for more seasons but it’s not a show that needs another season at all.

A hell of a story. If I ever get my DVR under control I can see myself watching it again.

Would deffinatly watch another season, but would have liked the story for the captain to have continued a bit more.