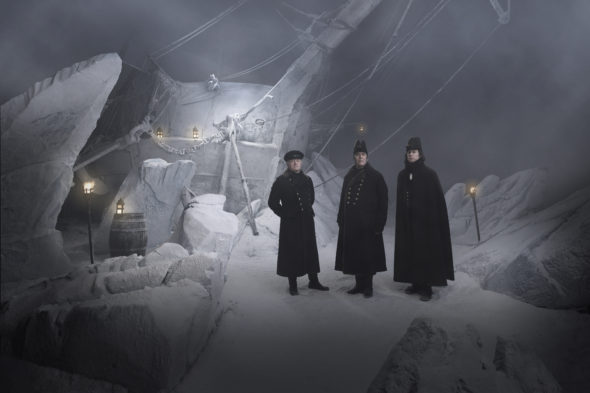 Is the first season of The Terror TV show on AMC terrifying or stupefying? As we all know, the Nielsen ratings typically play a big role in determining whether a TV show like The Terror is cancelled or renewed for season two. Unfortunately, most of us do not live in Nielsen households. Because many viewers feel frustration when their viewing habits and opinions aren’t considered, we’d like to offer you the chance to rate all of The Terror season one episodes. **Status update below.

An AMC supernatural anthology drama, The Terror stars Jared Harris, Tobias Menzies, Ciarán Hinds, Paul Ready, Adam Nagaitis, Nive Nielsen, Ian Hart, and Trystan Gravelle. The first season centers on the Royal Navy’s perilous quest to find the Northwest Passage. Despite heightened fears, fading hopes, and scarce supplies, they forge on, until a supernatural threat endangers them all. Through the course of this ordeal, The Terror explores everything that can go wrong, when desperate men struggle with their environment and one another.

What do you think? Which season one episodes of The Terror TV series do you rate as wonderful, terrible, or somewhere between? Should AMC cancel or renew The Terror for a second season? Don’t forget to vote, and share your thoughts, below.

One of my favourite horrors already. Really hope we get a season 2.

My husband and I were looking for a new series to watch. Extremely happy we came across #TheTerror on its first episode!! It grabbed our interest right away! I personally love historical shows/movies/books and with the trauma these two ships had to go through. Exploring the unknown and finding themselves in desperate times. You may or may not understand, but this was our ancestors scouting out new and unknown places. The Indians do have spiritual beliefs, and can also believe in their Warriors protection through the beast. I can go on & on about #TheTerror!! lol Please consider bringing it… Read more »

This mini-series? Has piqued my interest of the true accounts of the Terror and the search for the Northwest Passage. Desolately bare and frigid horror, not of the Tuunbaq, but simply of survival.

If Captain Crozier remained behind to create a second season, it is purely speculative as to what became of him. That adds to my interest.

I found this very enjoyable.

The biggest load of tosh I have had the misfortune to watch.the viewing figures speak volumes. Utter balderdash.

Have looked forward each week to see these brave men do what they must to survive.

This is a limited series based on Dan Simmons book. This was not done to be made into a second season.

This is a limited series based on Dan Simmons book. This was done to be made into a second season.

Please do not cancel this series-it is so great!!

LOVE this show…
Amc better not cancel it .
All the Actors are great and have been in other great shows
Outlander , GOT and The Crown
TERROR ..is awesome hope to see a season two next year .

This is my all time favorite show. The acting is phenomenal. The characters so sympathetic. You feel so badly about what they are going through. The filming and directing is brilliant. It is so thought provoking. I like it better than the Walking Dead. It is so unique and different. It is a masterpiece in my opinion. Fantastic job everyone involved.

I have thoroughly enjoyed watching this new series with superb acting with on going suspense.
I hope there Is a series 2 in the making.

This was a wonderful episode. Loved it. Loved the book loved the tv version. where can I see the rest??!!!!