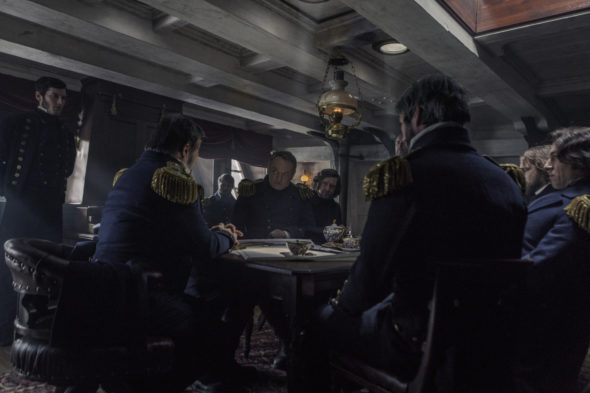 An AMC supernatural anthology drama, The Terror stars Jared Harris, Tobias Menzies, Ciarán Hinds, Paul Ready, Adam Nagaitis, Nive Nielsen, Ian Hart, and Trystan Gravelle. The first season centers on the Royal Navy’s perilous quest to find the Northwest Passage. Despite heightened fears, fading hopes, and scarce supplies, they forge on, until a supernatural threat endangers them all. Through the course of this ordeal, The Terror explores everything that can go wrong, when desperate men struggle with their environment and one another.

The first season of The Terror averaged a 0.36 rating in the 18-49 demographic and 1.22 million viewers. Learn how The Terror stacks up against other AMC TV shows.

This show premiered with very good numbers on a Sunday night but the ratings plunged on Mondays. Will AMC cancel or renew The Terror for season two? Things don’t look good. Based on what the producers say, I don’t think it will return. For now, I’ll keep a hungry eye on the Nielsens and update this page with breaking developments. Subscribe for free alerts on The Terror cancellation or renewal news.

6/22/2018 Status Update: The Terror has been renewed for season two on AMC. Details here.

What do you think? Did you think AMC would renew The Terror TV show for season two? How would you feel if AMC cancelled this TV series, instead?

I absolutely was intrigued with this series, even though I had to watch each episode 2-3 times because of the English accents, not complaining though, I would have watched it over and over. But with all but Captain Crozier dead, I wonder where the series would go from there.

I love the 1st season I love shows like this. I really do hope that AMC will pick it up for a few more seasons so we can see Francis and what he does with his life. Again awesome series

Valid question since the final show kept being referred to as ‘season finale’ rather than ‘series finale’.

Carlos Pineda
Love this Series, hope there is a few more Seasons!!!

I love this show. It is intriguing on so many different levels. Definitely keeping my fingers crossed that it will be renewed for a 2nd season!

I hope they renew. I love this show and the characters !!

This show has me hook line and sinker! I hate getting this involved with s program just to have scrapped !

What would season 2 be about? the story is finished. nothing more to add really. so i dont see how season 2 would make any sense to be honest.

In my opinion, it would make perfect sense. Over 50 years following the expeditions demise, more people died in search parties and expeditions than on Franklin’s expedition itself. There was even a search and rescue expedition that ended up in the exact same situation, trapped in the ice for years, but they somehow managed to escape on foot, also resorting to cannibalism.

i will be devastated if they cancel this show.THE best show i have seen in a long while bar none.

really man? im from mexico and i thougt i was the only one

Same here. The book is my fav historical fiction EVER!

I agree …nothing wrong with mexicans liking the show

I will be deeply disappointed if this show is canceled. It’s one of the only shows on any channel I follow closely. I watch episodes repeatedly. Superb acting, gorgeous cinematography, compelling story, and above all–amazingly well developed and nuanced characters. This show is a gem, a diamond in the rough, and it would truly be a shame if it were not renewed.

I completely agree. Loving this show. Just bought the novel. Hope to see a Season 2.