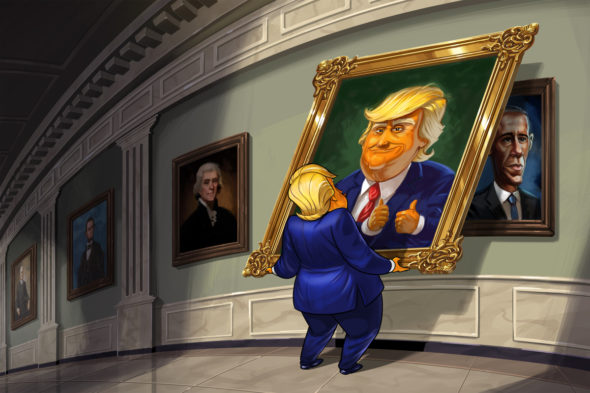 How long will Donald Trump last in office? Has the Our Cartoon President TV show been cancelled or renewed for a second season on Showtime? The television vulture is watching all the latest cancellation and renewal news, so this page is the place to track the status of Our Cartoon President, season two. Bookmark it, or subscribe for the latest updates. Remember, the television vulture is watching your shows. Are you?

Whether Donald Trump (Bergman) is taking comfort in Fox & Friends, re-living his electoral college victory, attempting to snatch the nuclear football, or reveling in “winning” the State of the Union Address, nobody knew how busy the Oval Office could be. In addition to sending up Trump, it also skewers his family, advisers and allies, as well as his political opposition.

Will Showtime cancel or renew Our Cartoon President for season two? This show began as animated shorts on The Late Show with Stephen Colbert and the ratings haven’t been great. However, I suspect the episodes are fairly cheap to produce. Showtime ordered seven additional episodes so it seems viewership is high enough for them. I will keep an eye on the Nielsens and update this page with breaking developments. Subscribe for free Our Cartoon President cancellation or renewal alerts.

1/22/19 update: Showtime has renewed Our Cartoon President for a second season.

What do you think? Are you glad that the Our Cartoon President TV show has been renewed for a second season? How would you feel if Showtime had cancelled this TV series, instead?

Will there be a third season?

Disgraceful show. It would only be entertainment if you did it about ALL presidents.

I enjoyed the show and look forward to another season.

I love this show and am amazed that it does not have higher ratings. Everyone I’ve recomend it to becomes a big fan. Very clever and really well
Done. Be very sad if it is not continued.

I hope they hurry up and bring season 2 out!!! This show is beyond hilarious and it’s soooo on point

Hope its back for a season 2

Please bring it back..funniest cartoon ever!!!