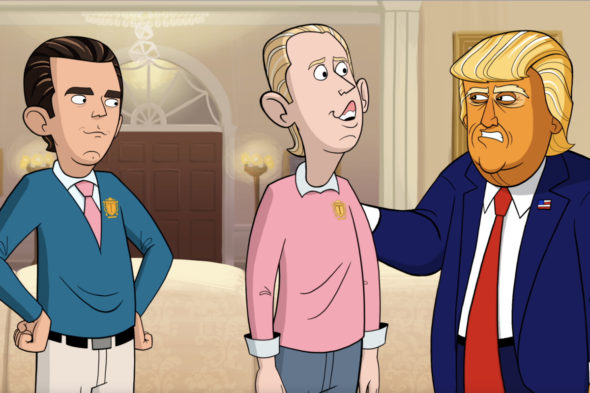 Just in time for the State of the Union, Showtime has released the premiere episode of their new TV show Our Cartoon President early.

From executive producer Stephen Colbert, the animated comedy “follows the tru-ish misadventures of the 45th President of the United States, Donald J. Trump, and his merry band of advisors and family members.”

Our Cartoon President premieres on Showtime on February 11th at 8 p.m. ET/PT.

LOS ANGELES, CA – January 28, 2018 – Ahead of Tuesday’s State of the Union Address, SHOWTIME is giving viewers an early opportunity to sample the premiere episode of the new animated series OUR CARTOON PRESIDENT, executive produced by multiple Emmy(R) winner Stephen Colbert, Chris Licht (The Late Show with Stephen Colbert) and R.J. Fried. The half-hour parody series follows the tru-ish misadventures of the 45th President of the United States, Donald J. Trump, and his merry band of advisors and family members. Along with the early episode, SHOWTIME has unveiled the poster art for the series. OUR CARTOON PRESIDENT is set to debut on air with two back-to-back episodes on Sunday, February 11 starting at 8 p.m. ET/PT. To watch and share the first episode of OUR CARTOON PRESIDENT, go to:

The new 10-episode parody OUR CARTOON PRESIDENT examines the quintessentially Trumpian details of the presidency and his most important relationships, and no one is safe – from his close family and confidants to key political figures from both parties and members of the media. In this parallel cartoon universe, the Commander-in-Chief opens the White House doors for an “all access” look at a typical day in the life of the President of the United States. OUR CARTOON PRESIDENT is produced by CBS Television Studios and executive produced by Colbert, Licht and Fried, who serves as showrunner. Tim Luecke serves as lead animator and co-executive producer. Matt Lappin is consulting producer. To learn more about OUR CARTOON PRESIDENT, follow @CartoonPres and join the conversation using #CartoonPresident.”

What do you think? Are you a fan of political satire? Will you watch Our Cartoon President?

I will never watch a show such as this. It will be rude,cruel and very ‘un-funny’. Stephen Colbert and others like him simply hate your President and refuse to find anything positive in his Presidency. Many viewers are giving up on self-important late night hosts, so called comics and award shows. So,how about some positive programming?

Going to give it a look! Love Colbert!

It is pathetic, what our society has become where you can belittle and make fun of someone just because their political beliefs don’t align with yours. I’ll take it for granted if Mrs. Clinton had won the title would have been a lot more respectful.

Don’t we have enough hate in the world? And we need Stephen Colbert producing this creating more heat mongering rhetoric? Standup be a human vote and stop hate mongering idiots like Stephen Colbert!