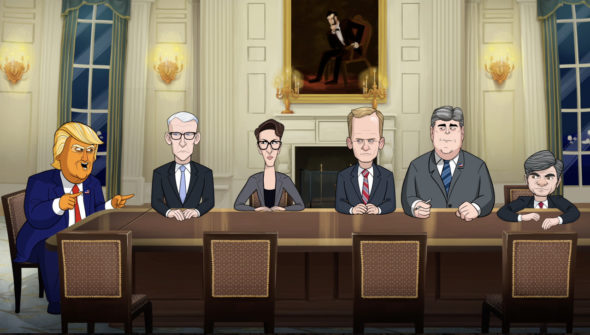 While Showtime has yet to cancel or renew Our Cartoon President for a second season, the cable channel has ordered seven additional installments of the animated parody series. The episodes will air over the summer months. Showtime initially ordered 10 episodes for the first season and five of those have aired thus far. The last of the original 10 episodes will air on April 8th.

Here’s the announcement, as well as a preview of next Sunday’s episode:

LOS ANGELES – March 8, 2018 – SHOWTIME has extended the order of its half-hour animated series OUR CARTOON PRESIDENT picking up seven new episodes to air this summer. The series will air the last of its initial 10-episode run on Sunday, April 8 at 8 p.m. ET/PT, and will then continue this summer with seven all new episodes. The political docuseries THE CIRCUS will take over that timeslot with a season premiere on Sunday, April 15 at 8 p.m. ET/PT.

Executive produced by multiple Emmy® winner Stephen Colbert, showrunner R.J. Fried and Late Show executive producer Chris Licht, OUR CARTOON PRESIDENT follows the tru-ish misadventures of the 45th President of the United States, Donald J. Trump, and his merry band of advisors and family members. The first season has already introduced audiences to Trump’s attempts at “winning” the State of the Union address, comforting disaster victims and rolling back President Obama’s accomplishments, as well as his co-dependent relationship with the media. The series premiere in February drew 2.3 million subscribers and the show is averaging two million viewers per week.

What do you think? Do you like the Our Cartoon President TV show? Do you plan on watching the additional episodes of this Showtime series?

Really love this show.. hate that showtime only have 10 episodes to start.. but I’m happy they see how funny and great thr show is to give 7 more episodes.. can’t wait to see what trump does next.. first time I ever been happy to see and enjoy Donald j trump on tv for more than .001 of a second.. hope to see 15 more season and hopefully make them a hour long.. shows is way to funny for 30 minutes.. all in all.. I give the show