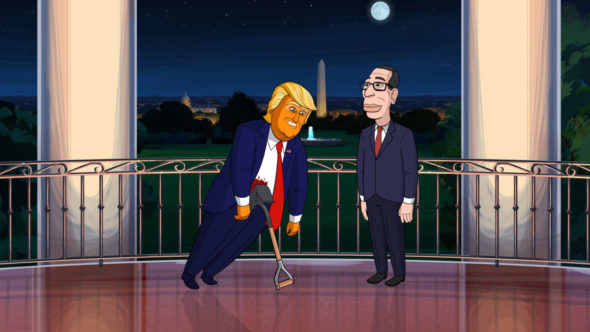 Is America great enought? Has the Our Cartoon President TV show been cancelled or renewed for a third season on Showtime? The television vulture is watching all the latest cancellation and renewal news, so this page is the place to track the status of Our Cartoon President, season three. Bookmark it, or subscribe for the latest updates. Remember, the television vulture is watching your shows. Are you?

In season two, Trump attempts to convince the electorate that he is “the greatest, least criminal president in history.” Meanwhile, Speaker of the House Nancy Pelosi and Senate Majority Leader Chuck Schumer scramble to lure the Democratic base back from freshman congresswoman Alexandria Ocasio-Cortez.

Will Showtime cancel or renew Our Cartoon President for season three? The ratings for this show have never been impressive but I suspect it’s fairly cheap to make. Showtime doesn’t have to attract advertisers, just please its paying audience. I’m guessing that it does so I think it will be renewed for a third season. We’ll see. Subscribe for free Our Cartoon President cancellation or renewal alerts.

1/8/20: Showtime has renewed Our Cartoon President for a third season.

What do you think? Are you glad that the Our Cartoon President TV show has been renewed for a third season? How would you feel if Showtime had cancelled this TV series, instead?

Please renew! This series is a 30 min reminder that the Trump administration is a joke.

This show is the only thing getting me though this presidency

Then, I guess you have 5 more seasons of hilarity in waiting for you. Lol…

FUNNIEST ONE A CLASSIC- SUN. Nite – AWESOME- Will Miss it!