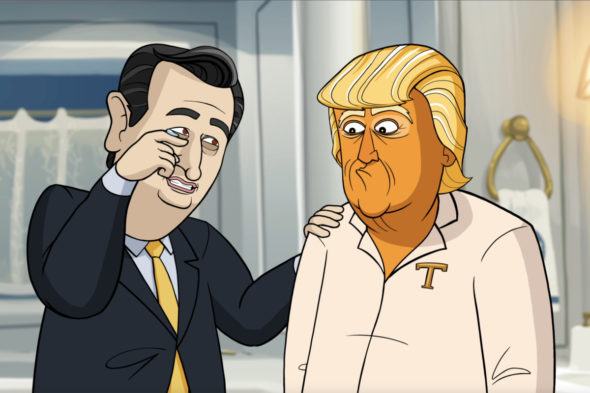 Our Cartoon President is ready for election season. Showtime just announced a one-hour midterm election special will air in November.

LOS ANGELES – August 22, 2018 – With one of the most consequential midterm elections of our time looming, the SHOWTIME animated series OUR CARTOON PRESIDENT takes a look at the political field in a special one-hour episode that involves Cartoon President Trump, his closest advisors, leaders of the Democratic party, a Russian president and an unforgettable hot air balloon ride. Premiering Sunday, November 4 at 10:30 p.m. ET/PT on SHOWTIME, OUR CARTOON PRESIDENT: ELECTION SPECIAL 2018 focuses on Cartoon Trump’s deepening concerns about what he fears is a coming Democratic blue wave and the threat of impeachment.

The political satire teams the cartoon president with his son Don Jr. to help Republicans win the midterm election and save America from the grips of democracy. Joining in the fight are Cartoons Vladimir Putin, Rudy Giuliani, Bill and Hillary Clinton and Barack Obama. Executive produced by multiple Emmy® winner Stephen Colbert, Chris Licht and showrunner R.J. Fried, OUR CARTOON PRESIDENT follows the tru-ish misadventures of the 45th President of the United States, Donald J. Trump, and his merry band of advisors and family members.

What do you think? Do you watch Our Cartoon President? Are you excited for the election special?

John Oliver show is just getting worse and worse. The first couple years it was fantastic but now it’s a total disaster. He says Donald Trump again this guy has just lost all his beginning motivation to do show. He was innovative and cool now he’s boring and repetitive. There’s so many Donald Trump jokes and accusations that people can tolerate. Now between him and Stephen Colbert. This type of TV news informative blah blah is just getting too boring. Because they say the same thing over and over and over and over again like that really is going to… Read more »

The ratings for this show is so bad it doesn’t matter the people watching it the amount of them is so insignificant this posting of this show is worthless. So who cares.!