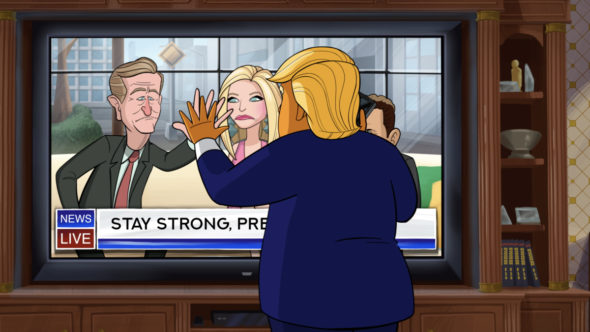 Will this show trump others in the ratings? Has the Our Cartoon President TV show been cancelled or renewed for a fourth season on Showtime? The television vulture is watching all the latest cancellation and renewal news, so this page is the place to track the status of Our Cartoon President, season four. Bookmark it, or subscribe for the latest updates. Remember, the television vulture is watching your shows. Are you?

Will Showtime cancel or renew Our Cartoon President for season four? The ratings for this show have never been very high but Showtime doesn’t have to please advertisers, just subscribers. I suspect that it’s not expensive to produce but, the incoming Biden administration may not be exciting enough for another season. I’m thinking that it will be cancelled. I’ll update this page with breaking developments. Subscribe for free alerts on Our Cartoon President cancellation or renewal news.

What do you think? Do you hope the Our Cartoon President TV show will be renewed for a fourth season? How would you feel if Showtime cancelled this TV series, instead?

There is still enough drama from the former president and his enablers in congress to field another season. His court issues will pick up soon and there is more to cover regarding the Big Lie. I actually get Showtime for Our Cartoon President and Shameless. If they both go I will have no need for it especially if Baseball gets started,

Well, Season 3 did a pretty fair job of spreading the lampooning all over the place. And Biden, unlike Trump, can take a joke. I just feel bad for the poor writers. They won’t be able to just simply trace what Trump does onto a cartoon anymore.

Come on you have to do a final epic one hour special of the final moments and aftermath of the trump administration. Perhaps ending with a zany benny hill type chase. Or a Clint Eastwood for a few dollars more type of ending. The whole pouty bad tempered end to everything and the hopeful new administration must be good for one more episode

So, basically, this series was ONLY created to be a political attack ad against the existing administration. Ratings were unimportant, because it was meant to make the current president look bad. Now that he’s going to be out of office, it is no longer needed and can be dropped.

sad thing is your right about that.

Robert Groeling I enjoy “Cartoon President” very much. I enjoy watching the highlights on U Tube. If Cartoon President continues, Id be willing to buy Showtime to watch it.