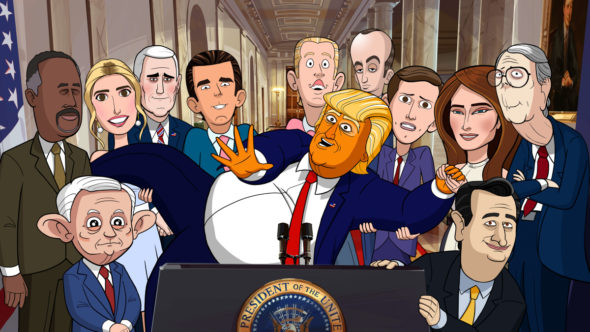 TV show description:
From creators Stephen Colbert, Chris Licht, Matt Lappin, Tim Luecke, and R.J. Fried, the Our Cartoon President TV show is a satirical animated series. The parody centers on a fictionalized version of Donald Trump (Bergman) as he goes about his days at the White House and beyond.

Whether it involves taking comfort in Fox & Friends, re-living his electoral college victory, attempting to snatch the nuclear football, or reveling in “winning” the State of the Union Address, nobody knew how busy the Oval Office could be.

Showtime bills Our Cartoon President as, the “…tru-ish misadventures of the 45th President of the United States, Donald J. Trump, and his merry band of advisors and family members.” In addition to sending up Trump, it also skewers his advisers and allies, as well as his political opposition.

What do you think? Do you like the Our Cartoon President TV series? Should this TV show be cancelled or renewed for another season on Showtime?

Have you see the ratings? Only ppl watching are those involved in show. If it were any other show, it would have been tossed out or probably never aired to begin with. But sure you’ll keep it going just from your hatred of Trump. Colbert should be soooo proud.

I hope that The Cartoon President is renewed. It needs a bit more “work,” but it still is funny.

Absolutely renew it. It is very funny.

This worthless show deserves to die. Trump is doing a good parody of a president already. No need to draw more attention to it. Colbert, I expected better from you.

This show is more immature than the dumbest episode of the sqidbillies. Colbert is just a child throwing an animated tantrum because President Trump was elected. I watched with an open mind, but it was so juvenile that 4as an adult, I had to turn it off as it was dumbing me down. If it was any other cartoon, it would cancelled already, but because it’s a Trump Trashing Show, Showtime will run it for the next 7 years of thge Trump administration. Showtime would rather waste money and lose subscribers, like myself and my extended family. It’s l was… Read more »

No won’t be watching.