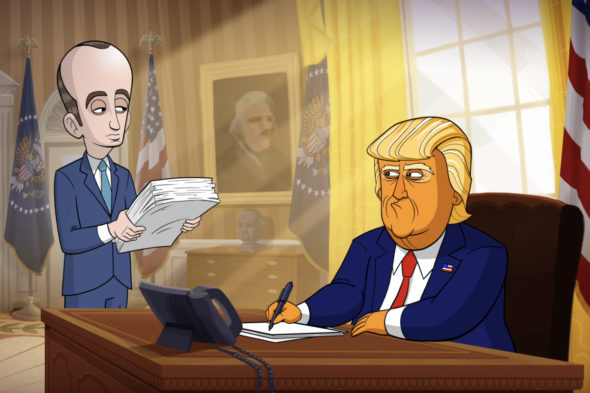 “Why did I even want this job?” Today, Showtime announced new episodes Our Cartoon President will premiere in July.

New episodes of Our Cartoon President premiere on Showtime on July 15th at 10:30 p.m. ET/PT.

LOS ANGELES – May 30, 2018 -The SHOWTIME animated series OUR CARTOON PRESIDENT will return with seven new episodes starting on Sunday, July 15 at 10:30 p.m ET/PT. Executive produced by multiple Emmy(R) winner Stephen Colbert, showrunner R.J. Fried and Late Show executive producer Chris Licht, OUR CARTOON PRESIDENT follows the tru-ish misadventures of the 45th President of the United States, Donald J. Trump, and his merry band of advisors and family members. The first season has already introduced audiences to Trump’s attempts at “winning” the State of the Union address, comforting disaster victims and rolling back President Obama’s accomplishments, as well as his co-dependent relationship with the media. The series averaged over two million weekly viewers in its first 10-episode run.”

What do you think? Have you seen Our Cartoon President? Will you watch the new episodes?

Oh yeah…this show is much less offensive than Roseanne.