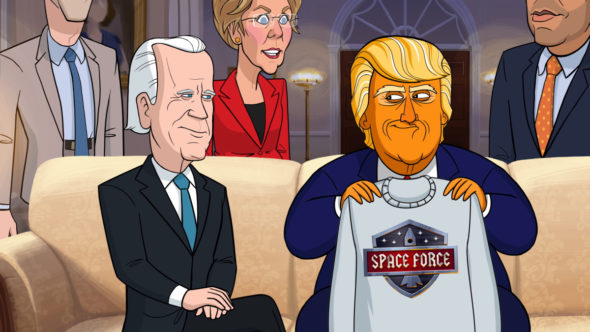 Get ready to dive into the 2020 election and the impeachment process with the new season of Our Cartoon President. The new series returns with the first ten episodes of season three later this month. Eight more episodes will air later this year.

Showtime revealed more about the return of the series and what is ahead in a press release. Check that out below.

“The SHOWTIME animated series OUR CARTOON PRESIDENT will return for its third season on Sunday, January 26 at 8:30 p.m. ET/PT on SHOWTIME. Executive produced by multiple Emmy(R) winner Stephen Colbert, showrunner R.J. Fried and Late Show executive producer Chris Licht, OUR CARTOON PRESIDENT kicks open the doors of the White House for a satirical look at President Trump, his family and the power players in Washington, D.C. and beyond. Season three order includes 18, 30-minute episodes, with 10 episodes airing until March 29th, and returning with 8 episodes to air this fall tied to the 2020 Presidential election.

What do you think? Are you excited for the return of Our Cartoon President? Are you a fan of this Showtime series?

Our Cartoon President is hilarious, very clever, and just plain therapeutic for my tortured psyche and soul. So glad it is returning!