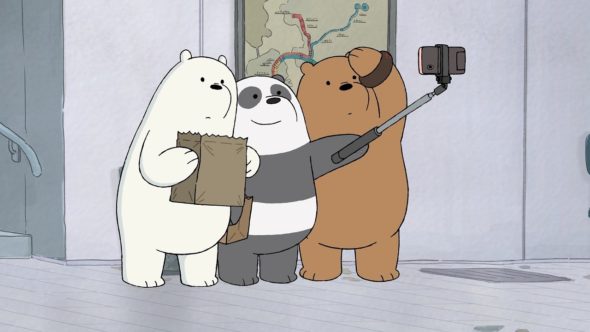 We Bare Bears is coming back. Today, Cartoon Network announced they’ve renewed the TV show for a fourth season.

Greenlit for a fourth season, the BAFTA and Annie Award-winning series created by Daniel Chong returns for ambitious adventures and more adorable baby bears. Set to debut later this year, the three bear brothers will have their funniest escapes yet in all-new episodes that will include holiday specials, a half-hour Halloween episode full of scary stories and a wedding where the bears come to the rescue as the best man.”

What do you think? Have you seen We Bare Bears? Will you watch season four?

YES! My boys and I love this show! Keep them coming.

I love this show so much! It is honestly the best way to relax after a stressful day in college

Thank you for making an amazing tv series. I’m thrilled they are contenueing productions. And really can’t wait for new episode on Hulu. My daughter who is 4 months since she has come home from hospital will not sleep unless she can hear and watch the show. So naturally we have seen all the episodes multiple times now. And it’s still a great show.
Her older brother and tired parents are big fans of the series, and cant wait to see new stories and see what other clever/cute song’s has been written.
⭐⭐⭐⭐⭐
Great work!

Pheww! I was so worried it was canceled.