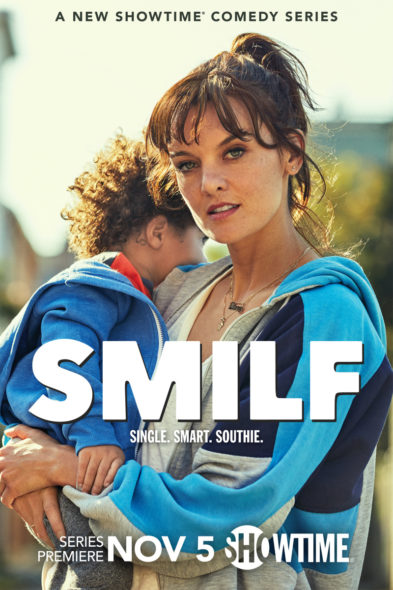 Good news! You don’t have to wait for the November 5, 2017 linear release of the new SMILF TV show on Showtime. You can watch the SMILF TV series premiere for free, right now, below.

Sorry, the video has been removed by Showtime.

Following The Episode, Viewers Can Catch An Exclusive Scene

From The Season Premiere Of SHAMELESS

NEW YORK – October 23, 2017 – Starting today, SHOWTIME is giving viewers an early opportunity to sample the series premiere of the network’s new half-hour comedy SMILF. The series, created, starring and executive produced by Frankie Shaw, is based on her Sundance Film Festival Jury Award-winning short film of the same name. At the end of the episode, SHOWTIME is offering fans a sneak peek of an exclusive scene from the season eight premiere of the network’s No. 1 comedy SHAMELESS.

SHOWTIME is releasing SMILF early, ahead of its on-air debut Sunday, November 5 at 10 p.m. ET/PT, following the 9 p.m. ET/PT season premiere of the SHAMELESS. Consumers can watch the SMILF series premiere for free now on YouTube, Facebook and SHO.com, as well as across multiple television and streaming providers’ devices, websites, applications and authenticated online services and their free On Demand channels. In addition, the episode is available for free on the SHOWTIME stand-alone service’s website www.showtime.com.

SHOWTIME subscribers can also watch the series premiere of SMILF now on streaming, authenticated and on-demand platforms including SHOWTIME ON DEMAND® and SHOWTIME ANYTIME®.

The new eight-episode, half-hour SHOWTIME comedy is a raw, honest look at the life of a 20-something single mom from quadruple threat Shaw. SMILF takes a comedic look at the life of Bridgette Bird (Shaw), a young woman from South Boston whose desires for relationships, sex and a career collide with the realities of working-class single motherhood. Shaw brings her singular, unapologetic point of view to the semi-autobiographical comedy series.

Shaw wrote and directed the pilot. Executive producing alongside Shaw are Oscar® nominee Michael London, Lee Eisenberg and Gene Stupnitsky, and Scott King. Janice Williams also executive produced the pilot. SMILF is produced by ABC Signature Studios as a co-production with SHOWTIME. For more information about SMILF, go to SHO.com and follow on Twitter, Instagram and Facebook.

SHOWTIME is currently available to subscribers via cable, DBS and telco providers, and as a stand-alone streaming service through Apple®, Roku®, Amazon, Google, Xbox One and Samsung. Consumers can also subscribe to SHOWTIME via Hulu, YouTube TV, Sling TV, DirecTV Now, Sony PlayStation® Vue and Amazon Channels. The network’s authentication service, Showtime Anytime, is available at no additional cost to SHOWTIME customers who subscribe to the network through participating providers. Subscribers can also watch on their computers at www.showtime.com and www.showtimeanytime.com.

What do you think? Did you watch the SMILF TV series premiere? Do you plan to check out the first season when it makes its debut on Showtime? Let us know, below.

Yet another self-indulgent “comedy” by a Hollywood insider…